This article is using {{Card template}}.
See Help:Style guide/Card for how to edit this kind of article.
Edit this article
Reno the Relicologist
53778 • ULD_238
Regular 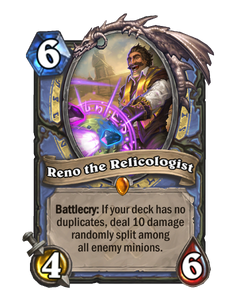 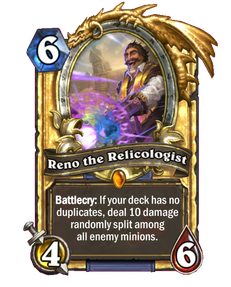 All his life, Reno Jackson was only a gatling wand away from becoming the greatest and most terrifying mage who ever existed. 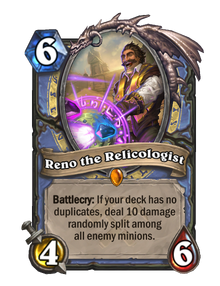 Reno the Relicologist is a legendary mage minion card, from the Saviors of Uldum set.

At first glance, Reno's Battlecry may seem underwhelming, especially with the strict condition of requiring a deck with no duplicates, but it is much more devastating than one may think. When compared with Avenging Wrath, Reno the Relicologist deals 2 additional damage for the same cost, and puts a 4/6 minion on the board, but the damage is limited to only enemy minions. If used correctly, he can cause a huge impact on the enemy board, reliably clearing it of minions.

This minion is extremely effective against Zoo decks, because minions in Zoo decks tend to have low Health, allowing Reno to effectively destroy the enemy board.

Reno can also be devastating against a single large minion, such as Ancient of War, The Lich King, or Edwin VanCleef. This lets him essentially function as an Omega Devastator that can be played 4 turns earlier.

Keep in mind that Deathrattles and Reborn will trigger after Reno's Battlecry. This makes him ineffective at clearing sticky minions, although the 4/6 body can still contest them.

The gang's all here! The League of Explorers has arrived, and that means their fearless leader Reno Jackson is back and, thanks to his new Gatling Wand, he's bringing tons of magical mischief as a new Legendary Mage card.[1]

This card represents Reno Jackson as he appears during the events of Saviors of Uldum.

Reno's class is based on whatever amazing loot he has most recently found and is currently using. In this incarnation, he takes the role of a mage due to having picked up a magical "Gatling wand".[2][3][4]