This article is using {{Card template}}.
See Help:Style guide/Card for how to edit this kind of article.
Edit this article
Reliquary of Souls
57166 • BT_197
Regular 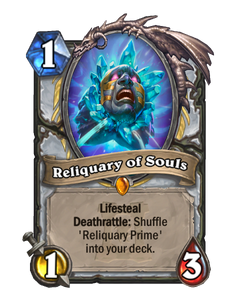 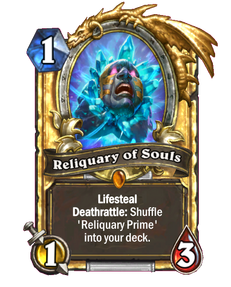 These three represent Anger, Desire, and Suffering. Much like raid night guild chat. 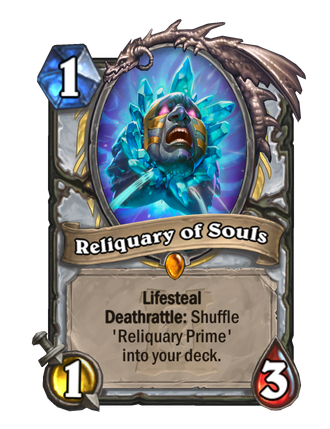 Reliquary of Souls is a legendary priest minion card, from the Ashes of Outland set. 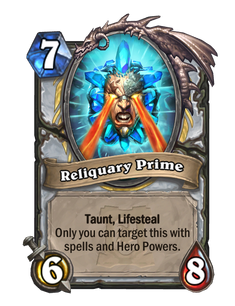 Reliquary of Souls is a stellar early game minion due to its 1 mana cost, 1/3 statline , and Lifesteal. It is best to play it early on as to get the most value from it and shuffle Reliquary Prime into your deck. Reliquary Prime is also quite a solid minion, packing a strong Taunt and Lifesteal combination backed by a 6/8 statline and an improved form of Elusive, which allows it to benefit from Priest's numerous buffs while being immune to direct damage and removal spells such as Polymorph and Hex. Reliquary Prime is still vulnerable to AoE spells and minion effects, however.

Reliquary of Souls is a boss in the Black Temple. This boss is a figure with three faces, representing the Essences of Anger, Desire, and Suffering respectively. The three have to be defeated one after the other. They all are DPS races, each with a different twist. It appears that it is some kind of soul vacuum.