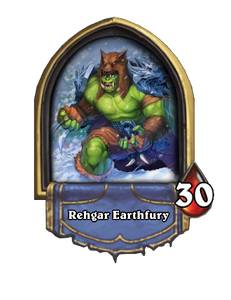 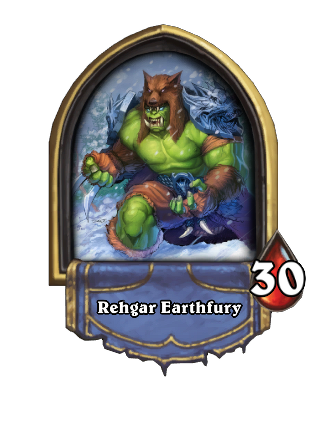 Rehgar Earthfury is the second boss in Warrior's Book of Heroes adventure. 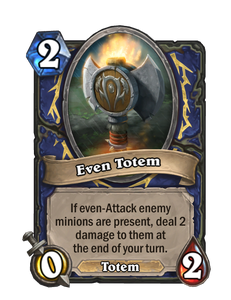 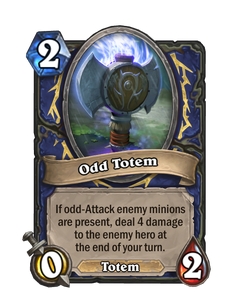 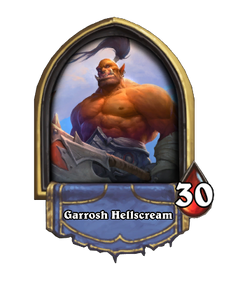 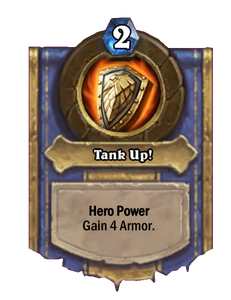 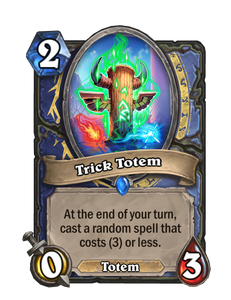 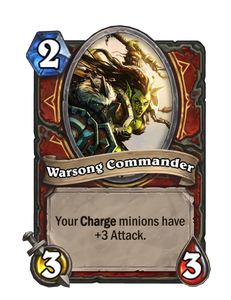 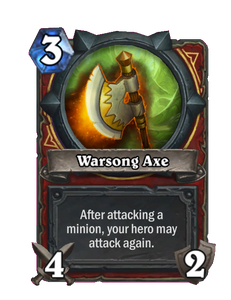 Rehgar is obligated to use his ability, so he can fill up all seven slots with totems and be unable to play minions from his hand.

By causing this you can cause him to take damage from overdrawing.

You are also at risk by not being able to play minions you draw: even ones will get destroyed and odd ones will cause you to take damage.

It is possible to "prune" his totems (lower them from 7 to 6, so that it will be refilled at start of his turn: otherwise he can play minions) to get:

Rehgar plays certain cards to change your cards' attack power for what is ideal for him if you do this though, such as changing them into a 0-attack toad he can destroy.

He can also temporarily give totems attack power using

Bloodlust so armor should be shored up in expectation of this.

By giving him a full hand so he is forced to overdraw this might end up destroying Bloodlust so he can't play it.

Garrosh Hellscream (present)
Thrall invited me to join him as his advisor on the world of Azeroth.
I knew I was ready to follow in my father's great legacy, but not all of Thrall's other advisors agreed...

Rehgar Earthfury
Why do you always undermine my counsel, boy?
Garrosh Hellscream
I am no boy. You weaken the Horde with compromise and capitulation!
Rehgar Earthfury
Foolish Mag'har...

Rehgar Earthfury
Is that how you speak to your elders?

Rehgar Earthfury
It isn't you Thrall loves, only the memory of your father.
Peace is achieved through negotiation. Even children know that.
We should have you cleaning the peons' boots to learn your place.

Rehgar Earthfury
I will not tolerate your disrespect!
Garrosh Hellscream
And I will not suffer weakness!

Rehgar Earthfury
Thrall should never have appointed you to advise him. Anyone could see your ignorance!
Garrosh Hellscream
Jealous words from a feeble foe.

Garrosh Hellscream
I see the Horde as it should have been - bold and strong.
Rehgar Earthfury
You would lead us to senseless war.

Garrosh Hellscream
Think more carefully before you cross me next time.
Rehgar Earthfury
You'll pay for your insolence one day...

Rehgar Earthfury
I will ask Thrall to send you back to Draenor where you belong.

Varian Wrynn while he was suffering from amnesia.

Following slaves' escape at Dire Maul, Rehgar realized that since his "heart was with them instead of the profit he could have made from their service", that he has had his fill of battle and the Crimson Ring. He has thus retired as a gladiatorial master and offering his services to Thrall, has been made the Warchief's trusted advisor. Rehgar and

Garrosh Hellscream used to be in disagreement with each other: while Garrosh wanted to destroy the Alliance, who he considers the Horde's enemies, and take Azeroth for their own, Rehgar wanted to remain open to diplomacy with the Alliance and conserve their treaty of non-agression with Theramore.