This article is using {{Card template}}.
See Help:Style guide/Card for how to edit this kind of article.
Edit this article
Refreshment Vendor
2704 • AT_111
Regular 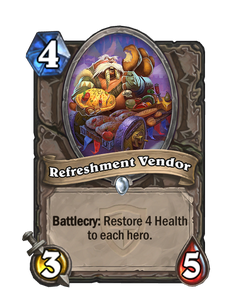 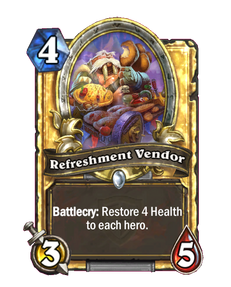 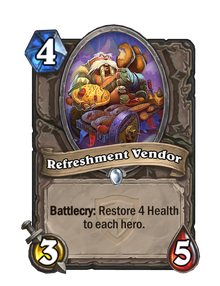 Refreshment Vendor is a common neutral minion card, from the Grand Tournament set.

A good card for slower control decks against aggro decks, due to both putting a body on the board and healing the heroes for 4 Health. Control decks do not usually care about healing their opponent in the early game. The minion itself is decently strong and will trade for 1 or 2 early-game minions.

It can provide some burst damage if you played Auchenai Soulpriest first.

The tuskarr are a kind-natured nomadic race that roams the southern coastlines of Northrend, guided by the carved cyclopean statues that mark their seasonal fishing routes. The tuskarr's tribal affiliation is evidenced by the sigils inscribed on their tusks, and although they are a peaceful race, they are constantly beset by the Kvaldir and an arctic race of murloc-like creatures known as the Gorloc. Yet even their enemies marvel at the tuskarr's prowess and fearlessness in catching some of the most dangerous creatures in Northrend's frigid waters, including whales and giant squid. Not even the unnamed leviathans that lurk in the ocean's depths are beyond the tuskarr's reach. The tuskarr use giant turtle boats as a transportation system among zones in Northrend. They lead the turtles by use of carrots on a fishing line.