This article is using {{Card template}}.
See Help:Style guide/Card for how to edit this kind of article.
Edit this article
Redemption
140 • EX1_136
Regular 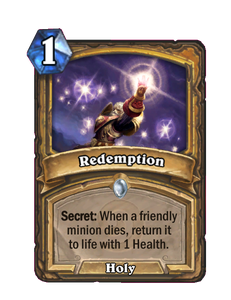 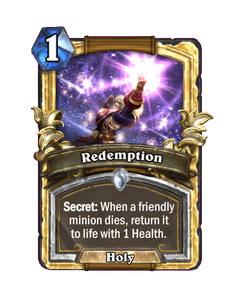 I am not sure how you get demptioned the first time. It’s a mystery! 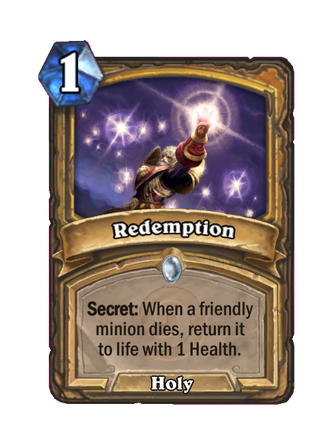 Redemption is a common paladin spell card, inducted into the Legacy set, formerly from the Classic set. 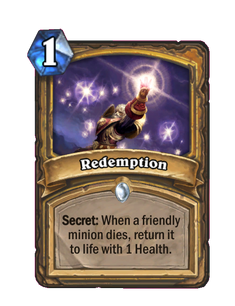 Redemption can often be used without much thought, as its effect is almost always helpful. It can however also be paired with strong minions that you know your opponent will kill so that you can still use them the next turn with 1 health.

When playing against Redemption, players can test for the secret by destroying a weak or less valuable minion before destroying more important targets.

Reinforce, which gives the opponent a very non-threatening target to trigger Redemption on. It is therefore best played on a turn in which the Paladin has no Silver Hand Recruits, or possibly while they are protected by minions with Taunt.

Redemption is the paladin resurrection ability from World of Warcraft. It is a long cast time spell that brings a dead player back to life, but can only be cast outside of combat.