This article is using {{Card template}}.
See Help:Style guide/Card for how to edit this kind of article.
Edit this article
Redeemed Pariah
61128 • DMF_222
Regular 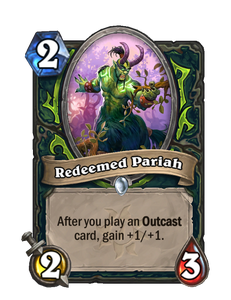 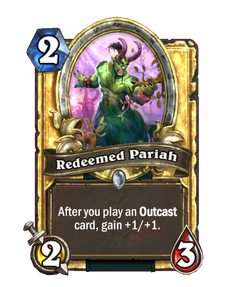 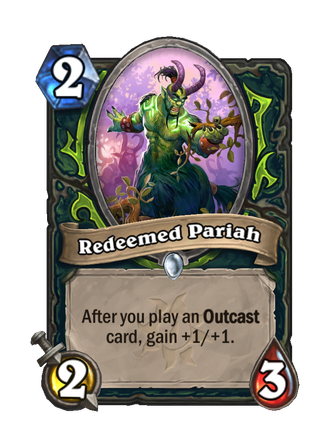 Redeemed Pariah is a common demon hunter minion card, from the Madness at the Darkmoon Faire set.

Redeemed Pariah is a centaur.

Centaur (sometimes pluralized as centaurs) are a half-humanoid, half-horse, war-like tribal race. They abound in central and southern Kalimdor, primarily in Desolace and the Barrens, where they engage in constant war against other centaur and tauren tribes. They are savagery and brutality incarnate.

Though legend held that they were the bastard offspring of

Cenarius, the barbaric centaur race were begotten by Zaetar, son of Cenarius, and the earth elemental princess Theradras 1,100 years before the opening of

The Dark Portal. Shortly after the centaur's creation, the ruthless creatures murdered their father. The five centaur clans in Kalimdor are therefore the bastard offspring of Zaetar. As such, they have shared ancestry with the dryads.

As its name implies, this particular centaur has abandoned its warlike ways to become a demon hunter.