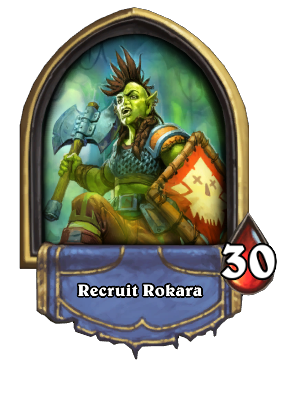 Recruit Rokara is an alternate hero for the

This is one of Rokara's appearances.

Recruit Rokara is obtained by purchasing the Tavern Pass and reaching level 40 in the Forged in the Barrens' Rewards Track.

Once unlocked and selected for use, Recruit Rokara replaces Garrosh Hellscream whenever playing with a Warrior deck, as well as:

When viewed in the Collection, Recruit Rokara has the following flavor text:

After training in the Barrens, Rokara's discovered that a hero's journey can take you anywhere—even into the weeds.
Earnable after purchasing the Tavern Pass.

Most of Recruit Rokara's sounds are the same as Young Rokara. Unique, different ones are noted as Unique in References section.