Hearthstone Wiki
Register
Don't have an account?
Sign In
Advertisement
in: All cards, Wild format cards, Pages with no result queries, Goblins

This article is using {{Card template}}.
See Help:Style guide/Card for how to edit this kind of article.
Edit this article
Reckless Rocketeer
445 • CS2_213
Regular 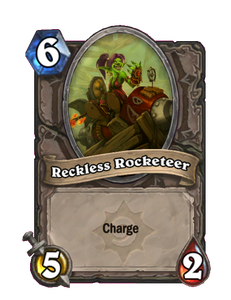 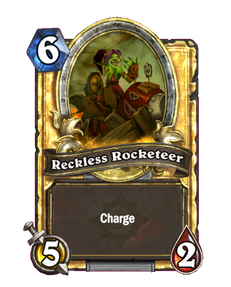 One Insane Rocketeer. One Rocket full of Explosives. Infinite Fun. 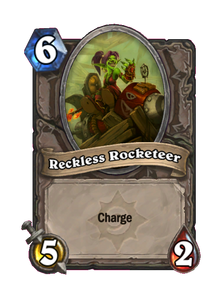 Reckless Rocketeer is a neutral minion, inducted into the Legacy set, formerly from the Basic set. 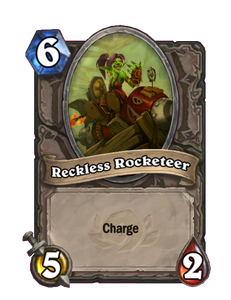 Regular and golden Reckless Rocketeer are uncraftable and cannot be crafted or disenchanted.

Reckless Rocketeer is a powerful but vulnerable minion. Its 5 attack combined with Charge makes it perfect for dealing a quick burst of damage. However, its 2 Health means it will often be destroyed in its first strike if used against another minion. In this case, Reckless Rocketeer can be considered similar to a spell dealing 5 damage that is restricted by Taunts.

Rocketeer is generally chosen to provide burst damage, perfect for closing a match before the opponent can rally. While vulnerable because of its 2 Health, the Rocketeer can provide a big-enough burst of damage to push the opponent over the edge, making its 2 Health meaningless if the game is won before the opponent's turn. The Rocketeer can also be useful for removing large threats such as Fire Elemental, for which purpose it can be a very handy albeit somewhat expensive card.

This card is often replaced by Leeroy Jenkins as a finisher, who's much more cost-effective and his downside doesn't matter when he's used to kill the opponent. In Arena it's a decent pick as an expensive finisher or removal, although Argent Commander or Evasive Wyrm are more versatile since their Divine Shield allows them to survive trading and leave a decently statted minion behind.