This article is using {{Card template}}.
See Help:Style guide/Card for how to edit this kind of article.
Edit this article
Reckless Experimenter
49416 • BOT_566
Regular 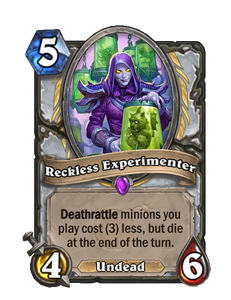 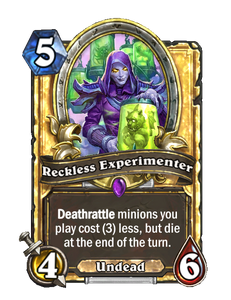 Dimensions: Full • 330 x 410px
Deathrattle minions you play cost (3) less, but die at the end of the turn.
Flavor text

It's hard to call her reckless when it's clear she knows what she's doing. 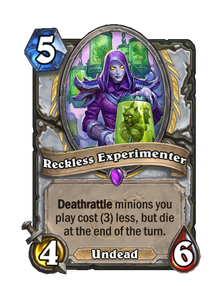 Reckless Experimenter is an epic priest minion card, from The Boomsday Project set.

Reckless Experimenter can be used as a way to cheat out Deathrattle effects, bypassing the usual need to kill the minion off while also providing a hefty mana discount. Since any minions you play will cost card advantage, it works best with cards that produce minions, such as Twilight Summoner, Haunted Creeper, or Sylvanas Windrunner. Use this card with caution, since many Deathrattle minions aren't worth playing without the body they provide.

Commentary: We've decided to make a change to how Reckless Experimenter functions due to an unwanted interaction with SN1P-SN4P that allows for an early-game infinite damage combo in Priest decks.