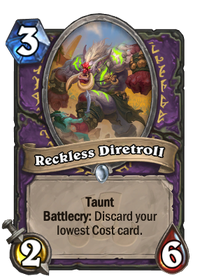 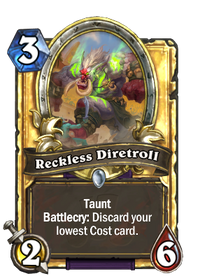 Reckless Diretroll is a common warlock minion card, from the Rastakhan's Rumble set.

Reckless Diretroll can be obtained through Rastakhan's Rumble card packs, or through crafting.

Judging by his skin color, Reckless Diretroll specifically appears to be a dire blood troll. This would make him the first known example of a male dire blood troll; with blood troll society being strictly matriarchal, all dire blood trolls that have previously been seen in Warcraft have been female.