This article is using {{Card template}}.
See Help:Style guide/Card for how to edit this kind of article.
Edit this article
Reckless Apprentice
63059 • BAR_544
Regular 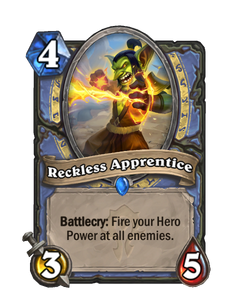 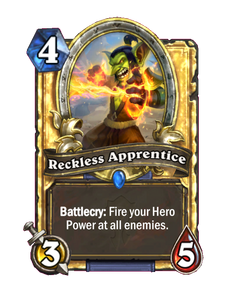 It’s all a great learning experience until someone accidentally aggros the boss. 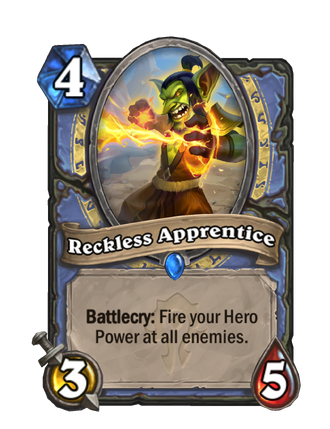 Reckless Apprentice is a rare mage minion card, from the Forged in the Barrens set.

Played on its own, Reckless Apprentice can be read as "Battlecry: Deal 1 damage to all enemies" attached to decent stats for the cost, effectively a better

Arcane Explosion for free. Where this card truly shines, however, is in tandem with Hero Power boosting effects, such as

Fallen Hero, and (in Wild)

Arcane Amplifier, providing an efficient board clear and face damage.

In Wild, this also synergizes well with

Justicar Trueheart; however, as an even-cost card, it cannot be used with