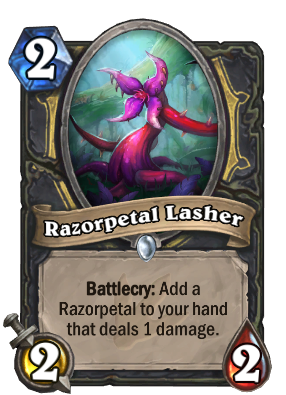 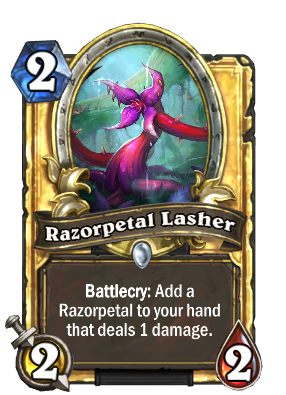 Battlecry: Add a Razorpetal to your hand that deals 1 damage.
Flavor text

The reason why there are no zombies in Un'goro.

Razorpetal Lasher is a common rogue minion card, from the Journey to Un'Goro set.

Razorpetal Lasher can be obtained through Journey to Un'Goro card packs, or through crafting. 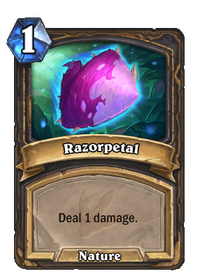 The spell generated by this minion is fairly weak, but can be used to trigger Combos or spell synergies like Gadgetzan Auctioneer and Violet Teacher. It should be noted, though, that Razorpetal Volley is a probably more interesting choice in order to get cheap damage spells.

A lasher is an ambulatory plant and often hostile. They can be found in the Wailing Caverns, Maraudon, Un'Goro Crater, and Dire Maul. Lashers are elementals in-game, but in lore they are just "plants".

The lashers in Un'Goro Crater are known as bloodpetals and grow in several different varieties.