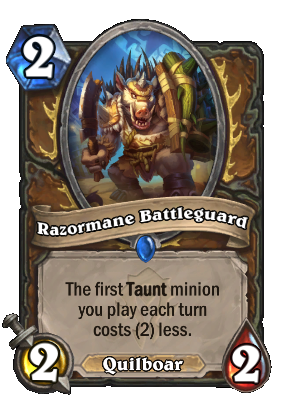 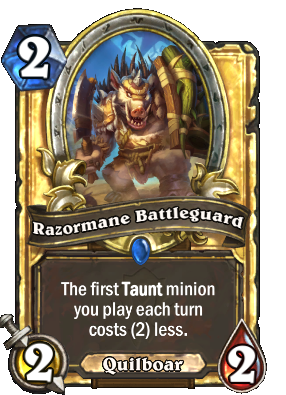 Razormane Battleguard is a rare druid minion card, from the Forged in the Barrens set.

Razormane Battleguard is a potent card that encourages a more tempo-oriented version of Taunt Druid (in contrast to the grindy Hadronox builds from Knights of the Frozen Throne). Its passive effect is active even on the turn you summon it, which effectively makes it a 0-mana 2/3 if you also have a Taunt minion to play in the same turn. On turn 2 (or turn 1 with The Coin), you can drop it with an Annoy-o-Tron or Bonechewer Brawler for a strong early board presence. Then, if your opponent fails to remove the Battleguard (a task made more difficult due to the Taunt minion), you can continue milking value from its ability on subsequent turns.

"Razormane Battleguards are quilboar that can be found in parts of Durotar. They are members of the Razormane tribe and prove a menace to nearby inhabitants and are led by Captain Flat Tusk."