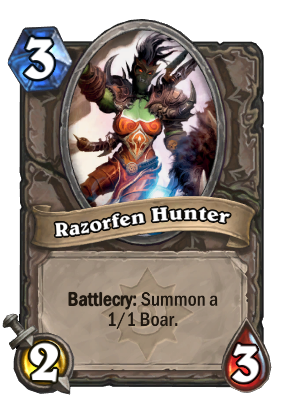 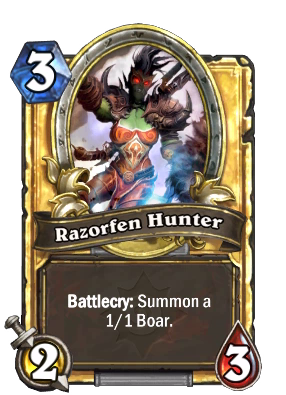 Someone did mess with Tuskerr once. ONCE.

Razorfen Hunter is a neutral minion, inducted into the Legacy set, formerly from the Basic set. 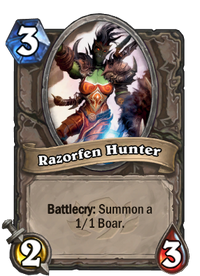 Two copies of regular and golden Razorfen Hunter are automatically given after the player completes the Ranked's New player experience system, unlocking Wild and Classic format. 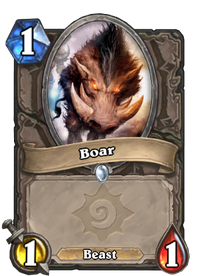 While the Razorfen Hunter itself is not a Beast, the summoned Boar is. This makes this card compatible with Beast-synergy cards such as Starving Buzzard, Tundra Rhino which gives it Charge ability or Wildwalker who can buff it by adding +3 Health.

In Wild, this card is outclassed by Sewer Crawler, which has identical stats but summons a better Beast and has better synergy with Battlecry effects and cards like Mutate.

However, this card clearly depicts a female orc, not a quillboar. Since the Razorfen tribe is composed solely of quillboar, this card may refer to an orc hunter resident within Razorfen territory, or perhaps an orc reputed for hunting the Razorfen.

The fact that the Razorfen Hunter's pet boar is named Tuskerr may imply that this card is meant to depict Korla, a hunter trainer in the orcish capital of Orgrimmar who has a pet boar named Tusker.