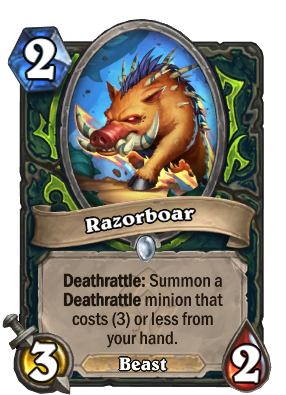 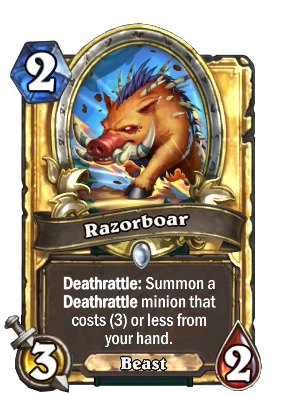 Deathrattle: Summon a Deathrattle minion that costs (3) or less from your hand.
Flavor text

And this little pig built his house out of VENGEANCE.

Razorboar is a common demon hunter minion card, from the Forged in the Barrens set.

Razorboar can be obtained through Forged in the Barrens card packs, through crafting, or as an Arena reward.

Razorboar has a premium aggressive statline and a potentially sticky Deathrattle effect, making it an ideal tempo play in the early game and a decent mana efficiency play later. Razorboar can ideally summon targets such as Razorfen Beastmaster, Sneaky Delinquent, Death's Head Cultist, or even a copy of itself. Tuskpiercer is an on-curve play that can help guarantee you will have a target to pull.

When you have a Razorboar in play, it's good to prioritize playing your non-Deathrattle cards to ensure a target remains in your hand, unless you need the extra pressure and are confident your opponent cannot clear the board. Generally, you shouldn't trade using Razorboar, and instead force your opponent to eventually deal with the threat and minion it summons.

Sometimes it's okay to play Razorboar even when you don't have a viable Deathrattle in hand, especially on an empty board. Your opponent may be afraid to use removal on the minion when it could summon something in its place. You can use this to secure early tempo.

As a Beast that has several Quilboar as targets, Razorboar is a good card for N'Zoth, God of the Deep-based decks.