This article is using {{Card template}}.
See Help:Style guide/Card for how to edit this kind of article.
Edit this article
Raza the Chained
40323 • CFM_020
Regular 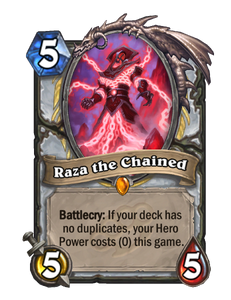 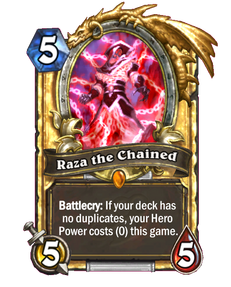 Dimensions: Full • 330 x 410px
Elite
Battlecry: If your deck has no duplicates, your Hero Power costs (0) this game.
Flavor text

"Could you do me a favor and get the keys from Kazakus?" 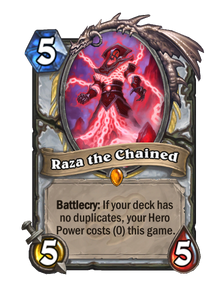 Raza the Chained is a legendary priest minion card, from the Mean Streets of Gadgetzan set.

Raza's card effect can be a major game-changer, benefiting strategies focused on Hero Powers. Having a free Hero Power helps Priests heal up their minion or themselves without sacrificing any tempo, especially on earlier stages of the game where it can make a difference in staying alive against aggressive decks.

While a 0-mana Lesser Heal is more of a small bonus, it's much more effective with alternate Hero Powers. Upgrading it with Justicar Trueheart gives you an ample source of healing every turn (just 1 Health less healed than Flash Heal), and damage-dealing Hero Powers like Mind Spike, Steady Shot from Sir Finley Mrrgglton or even DIE, INSECT! allows them to apply pressure or control the board more efficiently. It's also very powerful with Inspire cards, where you effectively gain their full effectiveness for 2 mana less, and opens more combo potential with Auctionmaster Beardo by giving you more mana to work with.

But what is undoubtedly the most powerful Hero Power to combo with Raza is Shadowreaper Anduin's Voidform. With Voidform refreshing every time you play a card, you can multiple cheap cards for large amounts of damage in a single turn. Combined with the Priest's myriad of way to generate cards like Thoughtsteal, Shadow Visions, Lyra the Sunshard, and Elise the Trailblazer, the Priest can grind away the opponent's health while having sheer card advantage.

If a Priest, having played Raza, is fortunate enough to have a Coldarra Drake in play, such as by discovering it from Kabal Courier, they can immediately win the game by entering Shadowform or playing Shadowreaper, which will allow them to repeatedly deal two damage to the enemy hero until their health is reduced to zero. Alternatively, they will be able to fully restore the health of their hero and minions during every turn, for as long as the Coldarra Drake remains in play.

Raza the Chained is an ethereal that is unique to Hearthstone. Rather than using cloth wrappings to keep his shapeless energy form bound in a humanoid shape, Raza is made out of the enchanted chains normally used by the Kabal to stabilize their volatile potions.[4]