This article is using {{Card template}}.
See Help:Style guide/Card for how to edit this kind of article.
Edit this article
Ray of Frost
52639 • DAL_577
Regular 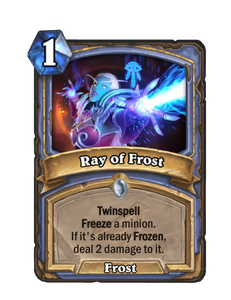 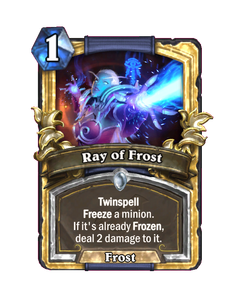 If you have zero chill, this can help. 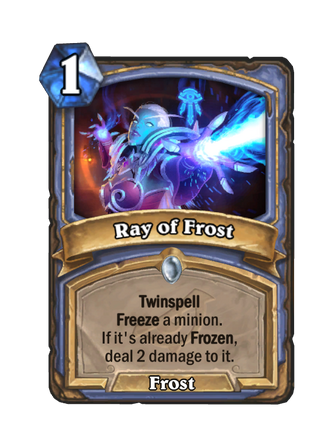 Ray of Frost is a common mage spell card, from the Rise of Shadows set. 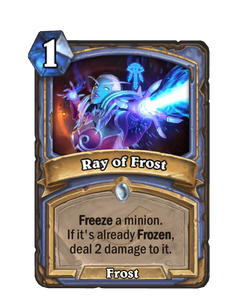 While this card may seem weak on its own, its Twinspell keyword provides it with extra value. Triggering it twice on the same minion can act as a weaker

Frostbolt, or it can be used as a weaker

Frost Nova against two enemy minions for 1 less Mana, or it can combo with other freezing cards such as Frost Nova to then ping two minions for 2 damage each.

Since this card acts as two cheap spells rather than one more expensive spell, there are situations where this card can be more viable than the comparable Frostbolt, such as in combination with

Sorcerer's Apprentice (letting you cast both copies of Ray of Frost for 0 Mana rather than Frostbolt for 1 Mana),

Gadgetzan Auctioneer (which will let you draw 2 cards),

Mana Cyclone (adding 2 random Mage spells to your hand). or in wild,

A list of mage and neutral cards with freezing effects in Wild can be found here.

Ray of Frost is a level 100 Frost mage talent which causes the mage to channel a beam of icy power at an enemy, slowing them and dealing gradually increasing damage over several seconds.