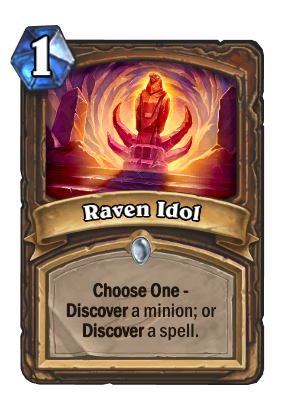 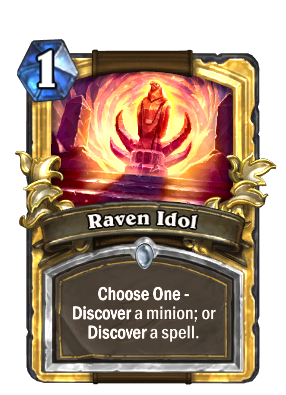 Was petrified when it found out it didn't make the cut for Azerothian Idol.

Raven Idol is a common druid spell card, from the League of Explorers set.

Two copies of regular Raven Idol are obtained by defeating Skelesaurus Hex, the first boss in The League of Explorers's fourth wing, the Hall of Explorers.

As a Wild format card, both regular and golden versions of Raven Idol can also be crafted for the following amounts: 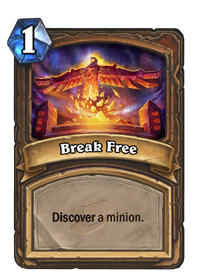 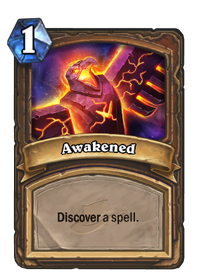 You're almost always better off using Raven Idol for a spell unless you simply must have a body of some sort to contest the board or finish your opponent off. Using it to get a minion can potentially draw not only any Druid minion, but every single collectible neutral minion in Hearthstone. While you get your choice of 3 minions, and Druid minions are 4 times as likely to come up as neutral ones, there is effectively no way to predict what kind of minion you could get. On the other hand, since there are no collectible neutral spells, using Raven Idol to discover a spell will generate much more predictable results, making it quite possible you can dig up the Swipe, Savage Roar, or Force of Nature you need.

Raven Idol is often included in Ramp decks because it gives an additional opportunity to obtain an Innervate or Wild Growth as early as Turn 1.

Idol of the Raven Goddess was a rare idol for druids in World of Warcraft: Wrath of the Lich King that increases your critical strike chance or healing in the appropriate forms. It was a quest reward from Vanquish the Raven God, the last quest in the druid epic Swift Flight Form quest chain. Both the idol and the quest chain were removed in Mists of Pandaria, along with all other idols.