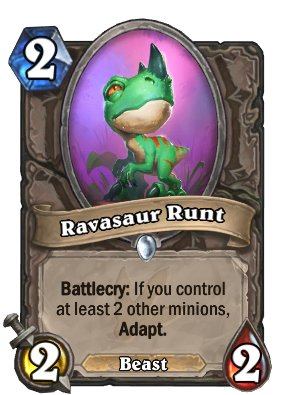 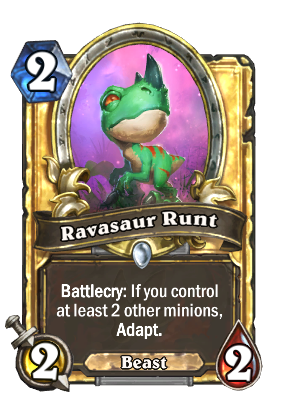 Battlecry: If you control at least 2 other minions, Adapt.
Flavor text

Doesn't like to adapt unless others are watching. Some minions are such show-offs.

Ravasaur Runt is an common neutral minion card, from the Journey to Un'Goro set.

Ravasaur Runt can be obtained through Journey to Un'Goro card packs, or through crafting.

This minion is a strong addition to aggressive and zoo decks that run a lot of minions early game, which allows this minion to meet its Adapt condition easily. Once adapted, its value often rivals some of the strongest 2 or 3-mana minions in the game, like Shielded Minibot and Druid of the Flame.

Paladins, Druids, and Hunters can play this on curve after Lost in the Jungle, Living Roots, and Alleycat respectively.

A neutral version of achieving this includes 1-cost Pirates such as Small-Time Buccaneer, Southsea Deckhand and Bloodsail Corsair, along with Patches the Pirate within your deck.

The ravasaurs of Un'Goro are large, raptor-like dinosaurs who're highly intelligent, volatile, and have a sense or code of conduct. Lar'korwi is the most dangerous. In Taur-ahe, its name means "Sharp Claw," but that does not do him justice.

Baby ravasaurs apparently grow very quickly. Larger than other raptor infants, ravasaur hatchlings grow into towering reptilian beasts capable of massive devastation. Venomhide hatchlings are vicious and must be trained from the moment they hatch.