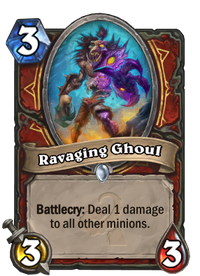 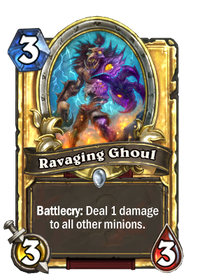 Battlecry: Deal 1 damage to all other minions.

But goes by "Ravishing Ghoul" when he hits the club.

Ravaging Ghoul is a common warrior minion card, from the Whispers of the Old Gods set.

Ravaging Ghoul can be obtained through Whispers of the Old Gods card packs, or through crafting.

This card works well with many staple warrior cards that gain benefits from suffering damage, such as Grim Patron, Frothing Berserker and Armorsmith. The last two can gain huge amounts of Attack or Armor from this effect with enough minions on the board.

Ravaging Ghoul is different to the usual options such as Unstable Ghoul due to its dealing damage via a Battlecry rather than a Deathrattle. This puts the player in more control of when the effect will activate, but prevents it from being used as a deterrent.