This article is using {{Card template}}.
See Help:Style guide/Card for how to edit this kind of article.
Edit this article
Rattlegore
59947 • SCH_621
Regular 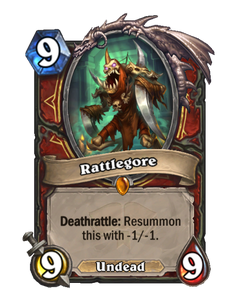 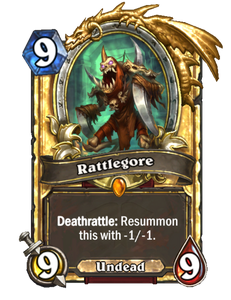 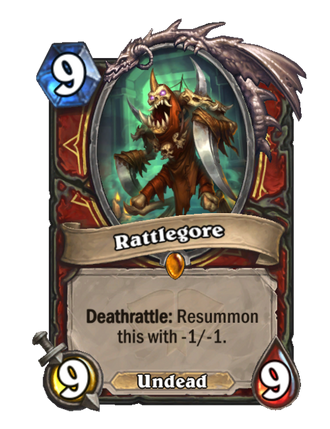 For the Duels hero, see Rattlegore.

Rattlegore is a legendary warrior minion card, from the Scholomance Academy set.

Rattlegore represents 45/45 stats split through nine bodies. Rattlegore is one of the most sticky minions in the game, creating large stats that can reliably trade through minion after minion, and still leave a body to threaten the opponent's hero. With its ability to trade up, Rattlegore is best suited to control versus control matchups, particularly those with multiple big minions of their own like Ramp Druid.

The primary downside to Rattlegore is its high cost. On nine mana, it's typically easy for the opponent to simply ignore Rattlegore and kill minions with more pressing effects, or just go face. You can get around this using cards like

Gather Your Party to bring Rattlegore out quicker, or

The Boom Reaver to speed up his effect.

Commencement in particular is one of the best ways to cheat out Rattlegore, summoning him on a discount and giving him much-needed immediate board presence.

Polymorph, which nullify his Deathrattle and high stats. He is also susceptible to Silence, although this will leave his decent statline intact without another removal tool.

N'Zoth, the Corruptor and Rattlegore alone can resummon an entire board filled with various stats of Rattlegore that leads to a very sticky board thanks to its Deathrattle. With

Spiritsinger Umbra's effect, playing Rattlegore effectively fills the board with up to 39/39 stats worth of Rattlegores, which something like a

Devolve is ineffective against (as it will turn even a 1/1 Rattlegore into a potentially powerful 8 mana minion); only a mass silence and clear like

The Amazing Reno or

Plague of Death can remove it on its own.

Rattlegore is a bone golem boss in Scholomance. After being defeated by the Alliance during the Battle for Andorhal, he is recreated from bones within Scholomance's Chamber of Summoning. He appears after