This article is using {{Card template}}.
See Help:Style guide/Card for how to edit this kind of article.
Edit this article
Ratcatcher
46936 • GIL_515
Regular 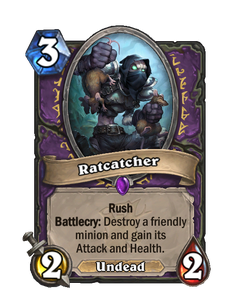 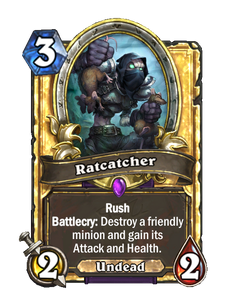 He's on the hunt for Togwaggle's missing rat. 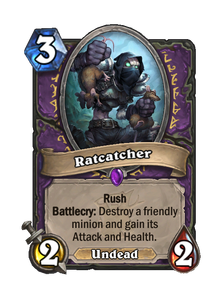 Ratcatcher is an epic warlock minion card, from the The Witchwood set.

Ratcatcher can reduce the number of minions on board for greater immediate value on a Rush minion. This is comparable to Void Terror, and has many of the same strengths and weaknesses. The key difference between Ratcatcher and Void Terror is that this minion can use the stat boost immediately to trade, which is comparable to giving the sacrificed minion pseudo-Windfury along with +2/+2 and Rush.

If your opponent has cast spells such as Corruption, Blessing of Wisdom or Embrace Darkness on one of your minions, Ratcatcher can be used to specifically remove such effects and keep that minion's stats on the board. Conversely, if you have Shadow Madness-type effects along with this card, Ratcatcher can be used to more effectively "steal" a minion.

Ratcatcher's flavor text references the flavor text of Rat Trap, where King Togwaggle has apparently lost his pet rat. Unfortunately, the Kobold King might not be too happy to see his pet found by this particular minion, whose occupation is to kill such creatures.