Once per generation, the troll tribes of Azeroth make a pilgrimage at King Rastakhan’s behest to participate in a no-holds-barred smackdown for the ages. This year, nine teams have formed around their mightiest combatants — Legendary Troll Champions who each represent a Hearthstone class. The teams enjoy the blessings of the Loa, the ancient spirits worshipped by the trolls, who have manifested themselves in the form of powerful Legendary minions. Players can also seek the aid of Spirits — a new kind of class-specific minion, each with impressive effects that synergize with the Loa.

It won’t just be King Rastakhan’s favor that players will compete for—the raucous crowd must also be entertained! Players looking to exhibit their gladiatorial prowess with flashy, over-the-top finishes can do so with Overkill — a new gameplay mechanic that rewards players for dealing excess damage to enemy minions.

Players thirsty for glory should keep their axes sharp, for soon after the launch of Rastakhan’s Rumble they’ll be able to test their might against Azeroth’s strongest troll champions in Rumble Run, the exhilarating new single-player Hearthstone experience coming with the expansion. Gurubashi event organizers will be sharing more details with all of the potential gladiators out there in the weeks ahead.

Druid: Wardruid Loti, Champion of Gonk's Raptors Loti keeps her distance from the other Rumble competitors, preferring the company of her dinosaur loa Gonk and other scaled companions. Druids will discover that she’s a master of shapeshifting and claw-to-hand combat.

Hunter: Zul'jin, Champion of Halazzi's Lynxs Warlord Zul’jin is reckless, bitter, and has a chip on his shoulder that’s even bigger than his blade. He’s is more than willing to unleash the primal power of Halazzi the Lynx loa upon his competitors, but he’s got a special knack for the mystical side of the hunt.

Mage: Malacrass, Champion of Jan'alai's Dragonhawks The fury of Jan’alai the Dragonhawk loa fuels Malacrass’s fire on the Rumble field. Despite a flair for the dramatic, Malacrass is a clever opponent. He’ll give Mages who are willing to plan ahead access to useful resources.

Paladin: High Priest Thekal, Champion of Shirvallah's Tigers This master fighter is a fan favorite! Wielding the Light as a weapon, he can use his healing energy in ways Paladins haven't seen before. Confident to a fault, Thekal moves almost as quickly as he talks, dancing around his opponents for the crowd.

Priest: Princess Talanji, Champion of Bwonsamdi's Zombies As princess of the Zandalari Empire, Rastakhan’s own daughter calls the loa of the dead, Bwonsamdi, her companion. Talanji will aid Priests in turning their foes’ own might against them if forced to fight.

Rogue: Captain Hooktusk, Champion of Gral's Sharks This charming and flashy pirate has come ashore to claim her share of glory in the Rumble, and she’ll lie, cheat, and steal to get it! Rogues who choose Captain Hooktusk as their champion will find that she rarely goes anywhere without her loyal crew.

Shaman: Zentimo, Champion of Krag'wa's Frogs The crowd finds this witch doctor mysterious, quiet, and more than a little unsettling. He’s content to let his giant frog loa, Krag’wa, do the fighting while he helps Shamans master channeling elemental magic.

Warlock: High Priestss Jeklik, Champion of Hir'eek's Bats The shrieking, shadow-skulking aspirant of the bat loa Hir’eek revels in the boos she gets from the crowd. Warlocks willing to make the right sacrifices will find Jeklik a useful champion who seems to be everywhere at once.

Warrior: War Master Voone, Champion of Akali's Rhinos Voone finds kindship in the rhino loa Akali. He’s a simple troll—he loves loud drums, a roaring crowd, and a raucous after-party—but his former employment by the Black Dragonflight will give Warriors special insight into the ways of dragons.

The Challenger’s Bundle pre-purchase includes 17 Rastakhan’s Rumble card packs and the Ready to Rumble! card back. 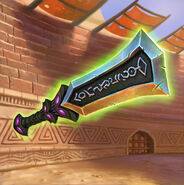 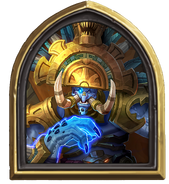 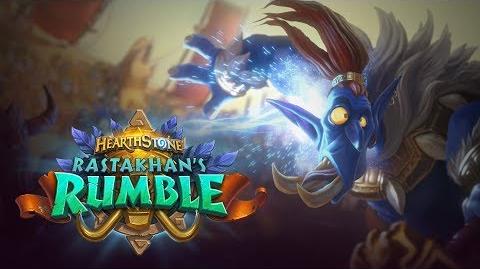 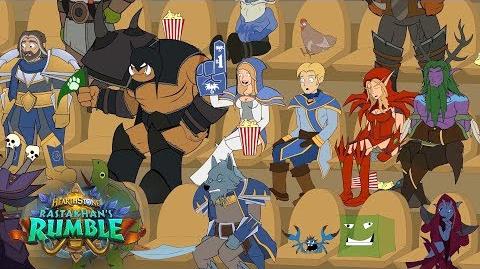 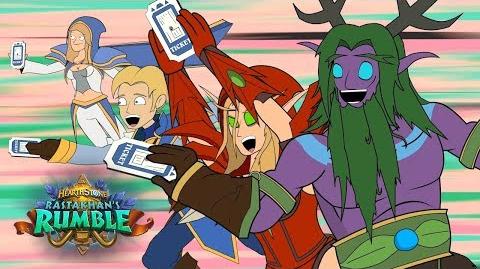 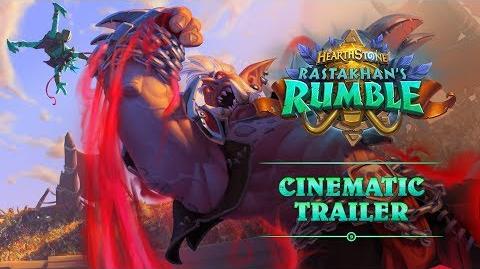 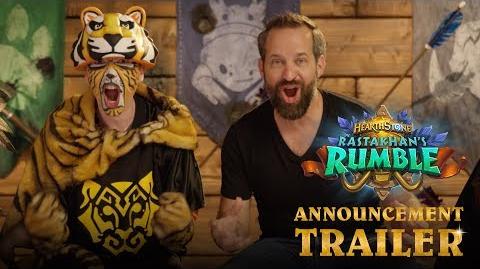 Retrieved from "https://hearthstone.fandom.com/wiki/Rastakhan%27s_Rumble?oldid=35226"
Community content is available under CC-BY-SA unless otherwise noted.