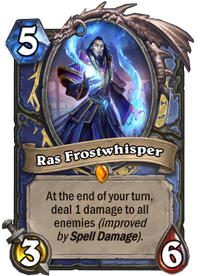 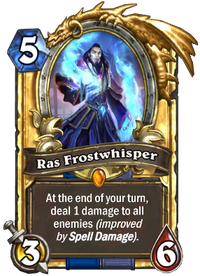 At the end of your turn, deal 1 damage to all enemies (improved by Spell Damage).
Flavor text

Always the favorite of Headmaster Kel'Thuzad, Ras nonetheless received a chilly reception from the other faculty.

Ras Frostwhisper is a legendary shaman/mage minion card, from the Scholomance Academy set.

Ras Frostwhisper can be obtained through Scholomance Academy card packs, through crafting, or as an Arena reward.

A great anti-aggro card, Ras Frostwhisper is essentially a more powerful version of Despicable Dreadlord, with an arguably better statline and the ability to hit face as well as minions. In Shaman and Mage, Ras can be combined with the fairly large amount of Spell Damage synergy they have, or Neutral minions like Malygos, to easily clear the board and shift the game into their favor. Even with no Spell Damage, the effect is generally powerful enough to include naturally in most Control or Highlander Mage and Shaman decks.

In World of Warcraft, Ras Frostwhisper was a level 43 elite lich of the Scourge and overseer of everything that happened in Scholomance. He watched over and taught all those who rose to the position of 'Dark Master'. He was a lieutenant and favored pupil of Kel'Thuzad.

Ras Frostwhisper was once a human mage from Stromgarde. He was a hedge mage, a rogue wizard that never received his formal training from Dalaran. He was among the first to join the Cult of the Damned and quickly advanced through its ranks. He turned himself over to the Lich King when the Scourge invaded, in return for immortality. Upon the ground in Stratholme, within the Slaughterhouse, Ras Frostwhisper took a dagger to his own neck and cut from one side to the other—all the time with a smile upon his face. His corpse fell onto Menethil's Gift and it is there that the Lich King raised his fallen corpse as a Lich, granting him immortality while Leonid Barthalomew the Revered looked on. He spent his time overseeing the operations in the necromancy school of Scholomance. Magistrate Marduke has a plan to rob the lich of his powers, return him to his mortal form, and slay him once and for all. He had an ogre servant Kormok.

After the Cataclysm a new quest from Alexi Barov to kill him once more was added. During the liberation of Stratholme Eligor Dawnbringer commented that Ras still haunts Scholomance, though he should already be killed at this point. The fact that he doesn't appear in the updated instance indicates that he is killed. Eligor's text would then be considered an error.