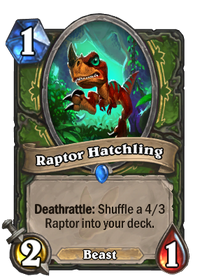 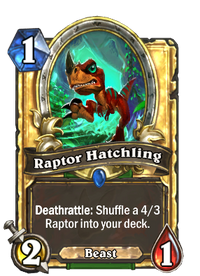 Deathrattle: Shuffle a 4/3 Raptor into your deck.
Flavor text

Raptor Hatchling is a rare hunter minion card, from the Journey to Un'Goro set.

Raptor Hatchling can be obtained through Journey to Un'Goro card packs, or through crafting. 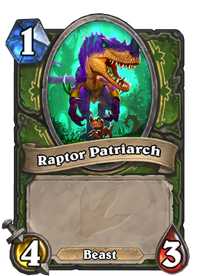 This minion is somewhat understatted initially, but the Raptor it provides is very powerful. The issue is that the raptor needs to be drawn first, but once it is, it can result in a large tempo swing. It also heavily synergizes with The Marsh Queen, as both Small Raptor and the Raptor count as one-mana minions that you have played. It's best combined with Tol'vir Warden to more reliably pull the Raptor Patriarch out from your deck.

Raptors are a type of predatory dinosaurs and one of the most iconic beasts of the Warcraft universe. They can be found both in Azeroth and Outland, as well as Draenor.

They are superb hunting beasts that can track prey over great distances and are often lethal to encounter when caught unawares.