In Ranked Play, players duel other players to increase their ranking. Clicking on the Ranked crossed-swords button in the top-right corner of the hero panel after choosing a hero will switch from "Casual" to "Ranked" Play. Ranked Play is technically a sub-play mode of Play mode, since you can only get to it after hitting "Play", but operates very differently from "Casual" mode.

When a player selects Ranked Play mode for the first time they start at Rank 25: Angry Chicken. In Ranked Play players are pitted against opponents of approximately equal rank to their own. Every win rewards a star above the player's medal. Enough stars provide the opportunity to advance to the next rank. Win streaks increase the pace at which stars are gained. At Rank 20 every loss will cause the loss of a star. Players no longer benefit from the Win streak bonus at Rank 5 through Rank 1, so every match counts in the higher rankings.

Ranked Play makes the path to move up in the rankings more transparent and gives top-level players more ways to differentiate themselves from each other.

There are two formats in Hearthstone: Standard and Wild.[1] Players are able to choose between these two for Ranked play, and can have a separate rank for each format. This means players can hit Legend in both Wild and Standard. A player only collects ranked rewards at the end of the season based on the highest rank attained in one format or the other, but not both.

Standard allows players to go head-to-head using only the most recently released Hearthstone cards. You’ll play Standard using a deck built solely from a pool of cards that were released in the current and previous calendar year, along with a core foundation of the Basic and Classic card sets (which will always be valid for Standard). You’ll be matched against other players who are also using Standard decks.

Random effects (including summoning random minions or cards, the Discover mechanic, transformations, or any other similar effects) will only summon cards that are eligible for the chosen format. Thus, random effects in Standard will summon only cards that would be usable in the Standard format.

Current allowable cards will come from the following:

Currently Curse of Naxxramas, Goblins vs Gnomes ,Blackrock Mountain, The League of Explorers, One Night in Karazhan, The Grand Tournament, Whispers of the Old Gods and Mean Streets of Gadgetzan are not a part of Standard. When the first new Expansion is released each year, every set that wasn’t released in the same year or the year prior will cycle out and no longer be part of the Standard format.

Adventures and Expansions that are not part of the Standard format will no longer be available for purchase from the Shop — this year, that includes Naxxramas and Goblins vs Gnomes. If players want any cards they missed out on for Wild play or just to fill out their collection, they’ll be able to craft them using Arcane Dust — even cards from Adventures that were previously un-craftable. Speaking of Adventures, if they’ve purchased at least the first wing of an Adventure before it cycled out, they’ll still be able to finish acquiring and playing the remaining wings.

Wild is the format where anything can happen. While Standard puts a bright spotlight on recently released cards and brings a more balanced experience, Wild is the Hearthstone you’re already familiar with; nothing is changing for Wild. Players can finish quests, earn gold, rank up on the ladder, get card backs, earn Legend rank, and use all the cards already collected to build a Wild deck, just like always. Ranked or Casual play with a Wild deck will match players with other players who are also using Wild decks.

To unlock the option to create Wild decks and play Wild format, you can craft any card that is not part of the current Standard format. If you already have such cards in your collection, then Wild format will already be unlocked by default.

You’ll receive bonus stars at the start of each season based on your performance from the previous season. This way, players that have progressed far into any given Ranked Play season will not be challenging those potentially new to the game or stomping all over players who are trying Ranked Play for the first time.

You’ll receive one bonus star for each rank you achieved in the previous season. For example, if you attained Legend, Innkeeper (Rank 1), or Black Knight (Rank 2) rank in any given season, at the start of the next season you would start off at Questing Adventurer (Rank 16) rather than Angry Chicken (Rank 25).

Currently, the plan is to feature only the top 100 players in Standard format. 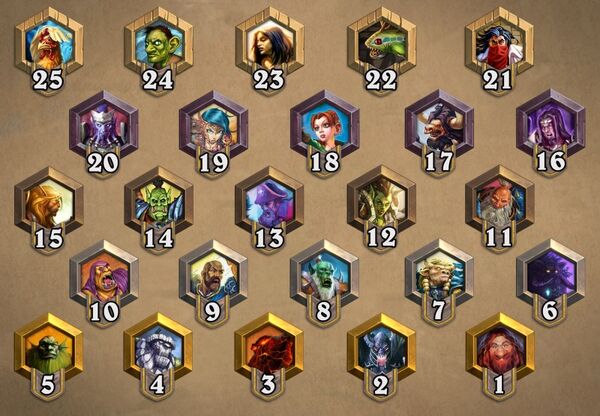 What medals looked like when Ranked Play was called "Medal Earning Play".

Grand Master
Add a photo to this gallery

Beyond Rank 1 is a special rank: Legend.

The following rewards are offered at the end of each season, based upon a player's ladder progression:

After you have won 500 Ranked games with a specific class, you unlock the animated golden hero for that class. Whenever you play that class, it’ll automatically be the golden version of the class rather than the regular one. Each Golden hero has its own special animations, just like the other Golden cards. Players can check their progress towards 500 wins on the deck selection screen in Ranked Play mode by selecting the Hero they wish to check.

Retrieved from "https://hearthstone.fandom.com/wiki/Ranked_Play?oldid=35322"
Community content is available under CC-BY-SA unless otherwise noted.