This article is using {{Card template}}.
See Help:Style guide/Card for how to edit this kind of article.
Edit this article
Rallying Blade
38745 • OG_222
Regular 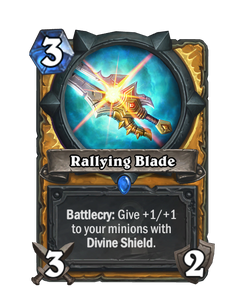 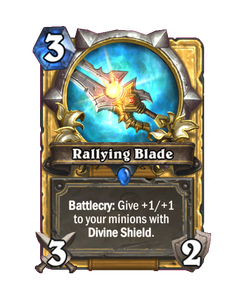 As far as blades go, this one is pretty great in the motivation department. 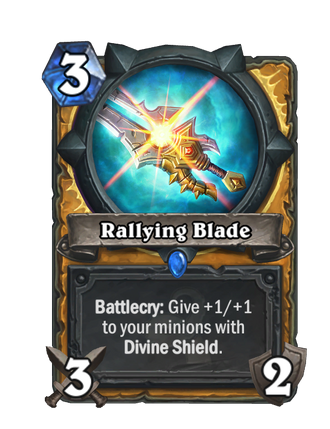 Rallying Blade is a rare paladin weapon card, from the Whispers of the Old Gods set.

By itself, this card is similar to

Fiery War Axe. But if you have minions with Divine Shield on board it'll provide a massive tempo swing in your favour and open up a lot of options in terms of trading. Examples include having a

Steward of Darkshire on the board, then playing

Stand Against Darkness and Rallying Blade, to get five 2/2 recruits with Divine Shield, forcing an enemy to burn a board removal on tokens. It can also be a great turn 3 play if you have an

Argent Squire on the board, or any minions buffed by

Eaglehorn Bow, it is also used in decks and situations where it's Battlecry is of little to no effect, as 3 mana is still a relatively cheap price to pay for the utility of having a 3/2 weapon.

This card's 'rallying' effect is connected to the Divine Shield ability, and may depict imparting Holy strength to those already illuminated by the grace of the Light.