Hearthstone Wiki
Register
Don't have an account?
Sign In
Advertisement
in: Cards, Card data, All cards,
and 9 more 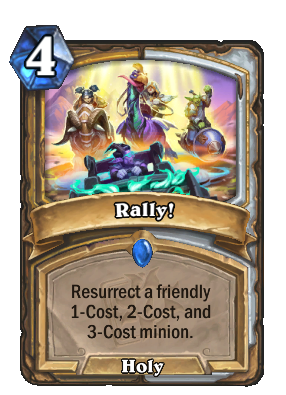 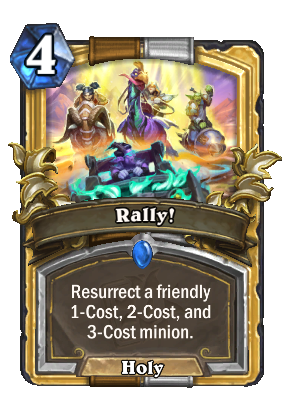 One for the squire, two for the gnome, three for the glory, and GO, GO, GO!

Rally! is a rare paladin/priest spell card, from the Darkmoon Races mini-set.

If the player uses a gold copy of this card, the summoned copies of dead minions will appear gold as well.

Rally! is a very strong tool for building a board in early game, potentially summoning 6 mana worth of minions. Paladin may use Call to Arms to summon minions to later be resurrected, and both Call to Arms and Rally! synergise with negative battlecries such as those of Injured Kvaldir, Injured Tol'vir or even Millhouse Manastorm.

In priest, Rally! can be utilized in tempo decks, resurrecting Shadow Ascendant and/or Dragonmaw Overseer, or in combo decks built around Nazmani Bloodweaver.

The resurrection phase is crescent, so, the 1 cost minion is always brought back first. Brazen Zealot greatly benefits by its effect, gaining +2 Attack instantly, since the other two will be summoned after her.

Murgur Murgurgle is a really strong card to use along Rally!, giving 2 extra Prime cards.