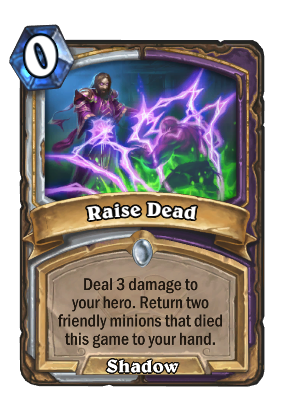 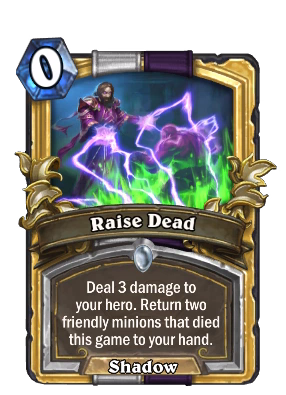 Deal 3 damage to your hero. Return two friendly minions that died this game to your hand.
Flavor text

Raise Dead is a common priest/warlock spell card, from the Scholomance Academy set.

Raise Dead can be obtained through Scholomance Academy card packs, through crafting, or as an Arena reward.

An incredibly versatile card that can let you replay high-impact minions or even just generate extra fuel, all for the relatively low cost of 3 health. While you have to pay for the minions a second time, this lets you reuse their Battlecry effects, making Raise Dead more versatile than other resurrection cards. This also lets you more aggressively use Battlecries, such as using Zephrys the Great for a Wild Growth and still using him for board control later in the game.

Big Priest and Control Priest can use Raise Dead to recall defensive minions like Obsidian Statue or value minions like Archmage Vargoth. Conversely, Zoolock can use this card for easy fuel to keep the pressure on the opponent, basically drawing two cards for no mana.

As a self-damage card, Raise Dead synergizes with Brittlebone Destroyer and Flesh Giant, as well as Warlock-exclusive cards like Lesser Amethyst Spellstone and Darkglare.

Try to avoid playing tokens or Shadow Madness, at least until you've played Raise Dead or a lot of other minions. This can fill your dead pool with undesirable cards and make the three health cost much steeper.

Raise Dead is an iconic spell which has appeared in every Warcraft game. In every incarnation, it summons skeletons from nearby corpses which fight for the caster.