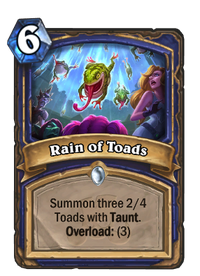 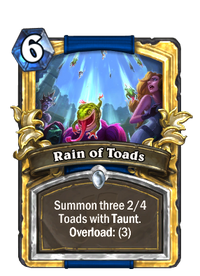 "Oh, THAT'S how she brings the warts!"

Rain of Toads is a common shaman spell card, from the Rastakhan's Rumble set.

Rain of Toads can be obtained through Rastakhan's Rumble card packs, or through crafting. 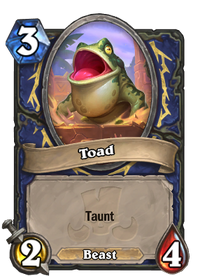 Rain of Toads is best used in a Control Shaman deck, or combined with overload synergies, being able to upgrade the Lesser Sapphire Spellstone on its own. Rain of Toads can also be a finisher to a Token Shaman deck, along with Bloodlust, or less commonly, The Storm Bringer.

Rain of Toads is reminiscent of the removed World of Warcraft shaman glyph Glyph of Rain of Frogs and the Tadpole Cloudseeder toy that replaced it, both of which allow shaman players to call down a rain of frogs at a target location.