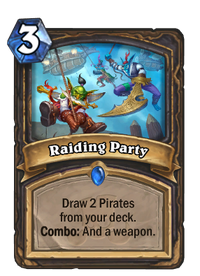 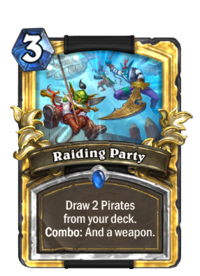 Draw two Pirates from your deck. Combo: And a weapon.

And a bowl of chips. And some of those little cocktail weenies!

Raiding Party is a rare rogue spell card, from the Rastakhan's Rumble set.

Raiding Party can be obtained through Rastakhan's Rumble card packs, or through crafting.

Dread Corsair and Waggle Pick work particularly well with this card, since both pieces can be drawn with one card and the Waggle Pick allows for playing 0-mana Dread Corsairs.

Commentary: Rogue already excels at drawing cards, so having another powerful option that offers consistent results has resulted in Rogue games that play out a little too similarly than we think is fun. We're making this change to better represent the power level of drawing from a very specific subset of cards.