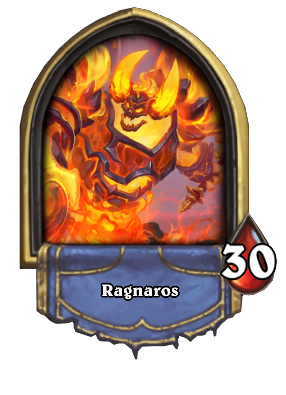 For other representations of Ragnaros, see Ragnaros (disambiguation).

Ragnaros is an alternate hero for the

"THIS WORLD AND ALL THAT YOU HOLD DEAR EXIST ONLY TO BURN!"

One of the four Elemental Lords, Ragnaros the Firelord is one of the most powerful forces on Azeroth.

Ragnaros The Firelord and his brethren once held sway over the entire world. As a servant of the Old Gods, he fought against the Titans for domination over the planet. The victorious Titans banished him and his brethren to the Elemental Plane — there to remain imprisoned until the end of time. It was then and there that the brothers turned on each other. For five millennia a battle was fought at the core of this world. It was during the Elemental Sundering that Ragnaros attacked Thunderaan, Prince of Air. Thunderaan was utterly defeated and the Firelord feasted upon his essence, but was unable to consume him entirely. Ragnaros divided what remained between his servants, Baron Geddon and Garr.
In the center of a vast lake of fire in the Elemental Plane stands Sulfuron Keep, the home of Ragnaros. Until comparatively recently, he ruled his underground land with a molten iron fist.

Ragnaros and his card back are available for purchase in Eternal Flame Bundle, available from July 6 to July 20, 2021.[1]

Once unlocked and selected for use, Ragnaros replaces Thrall whenever playing with a Shaman deck, as well as:

When viewed in the Collection, Ragnaros has the following flavor text:

The supremely powerful Firelord has a love of combustion that is only rivaled by his love of yelling.