Defeat your opponent, but if you feed an ever-growing, minion-eating, tiny Fire Lord, there may be a reward in it for you!

Ragnaros' Fire Festival is a Tavern Brawl. It debuted on July 5, 2017. For exact times, see the schedule.

This Tavern Brawl sees players doing battle with a constructed deck while a miniature Ragnaros does increasing amounts of damage to each player and their minions at the end of their turn. 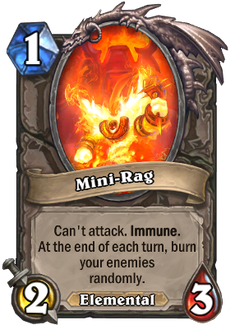 There are three main strategies to go for this Brawl; feed Mini-Rag as much as possible (and unlock fireworks in the process), go for a control route and minimize the damage, or stabilize Mini-Rag's firepower to abuse on-damaged effects.

For the first option, use cards that generate token minions and Deathrattle effects.

Mistress of Mixtures is a very good one drop since it heals both players, allowing you to survive longer. Other cards for creating multiple minions include

Wisps of the Old Gods, and for Paladins, Silver Hand Recruits. This is the fastest way to unlock fireworks, but if you also want to survive and win, add some healing and armor effects to your deck, such as

For the second option, you will want to play high-health minions to absorb Mini-Rag's pings and not get swarmed with fireblasts. Use Taunts to defend yourself against your opponents minions while also absorbing the random damage. Priests can achieve this easily with Health-boosting cards like

Kabal Talonpriest. While it's ideal to keep Mini-Rag's firepower low, in later turns it helps to fuel his damage a little bit to prevent the opponent from building board and add more damage.

The third option is somewhere in the middle, abusing cards with beneficial on-damage effects like

Gurubashi Berserker to win the game. You need to keep Mini-Rag's firepower high enough to proc these effects as much as possible, but not enough to wipe the board. Warrior is the best class for this strategy, due to the large number of cards with these effects such as

Note that Mini-Rag can be "reset" with non-targeted silence or return to hand effects (i.e.