Edit
watch 02:52
Roblox: DeepWoken - The Loop
Do you like this video?
Play Sound
Rafaam's Scheme
Regular 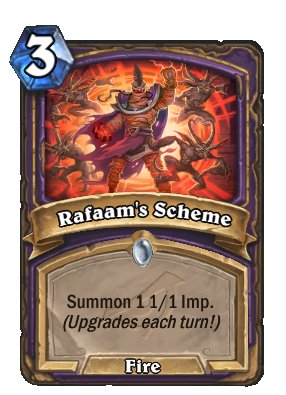 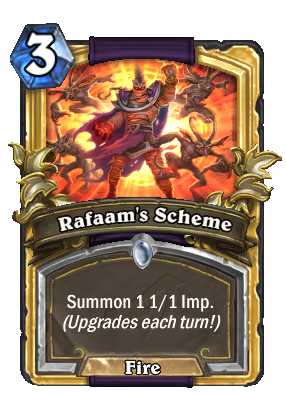 "When your first plan fails... imp-rovise."

Rafaam's Scheme is a common warlock spell card, from the Rise of Shadows set.

Rafaam's Scheme can be obtained through Rise of Shadows card packs, or through crafting. 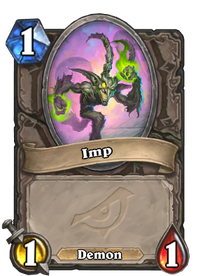 This card is best used in decks that focus on either Demon synergy or on summoning many small minions (such as Zoo decks). Standard Zoo tools such as Knife Juggler and Dire Wolf Alpha synergize well with the small Imps this card summons. Compared to Fiendish Circle, Rafaam's Scheme is far more powerful and cost efficient, but is a much less consistent card.

It is generally smart to mulligan this card into your opening hand; while you won't be able to play it in your first turn or two, you want it to power up as much as possible prior to playing it. That being said, while it's tempting to wait until this card is fully powered up and summon 7 Imps, that's not always the best move in a more aggressive deck, since in the 7 turns it will take to power up to that level, you'll probably have other minions in your hand you'll wish to play in the same turn to combo with your Imps. Instead, playing Knife Juggler and then summoning 6 Imps could prove to be a superior play, as well as one that can be performed one turn sooner. Also, while playing this card unpowered is certainly suboptimal, summoning 6, 5 or even 4 Imps is a reasonably good play for the 3 Mana cost. That being said, it's generally not wise to summon 3, 2 or 1 Imps with this card except in dire situations where you desperately need even the slightest amount of board presence.

Rafaam's Scheme is also a great way to set up Darkest Hour. It's both the cheapest and potentially largest mass summoning spell available to warlocks.