This article is using {{Card template}}.
See Help:Style guide/Card for how to edit this kind of article.
Edit this article
Quick Shot
2260 • BRM_013
Regular 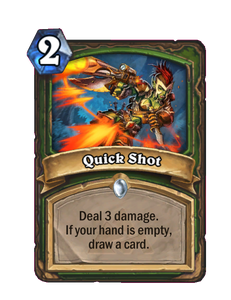 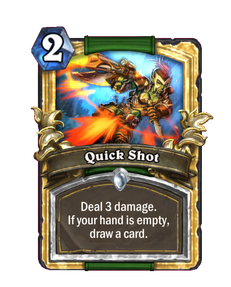 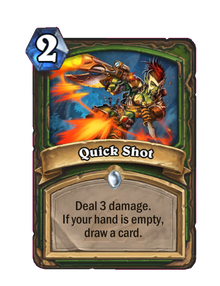 Quick Shot is a common hunter spell card, from the Blackrock Mountain set.

Example: If you have no other cards in hand when you cast Quick Shot on your own Acolyte of Pain, the minion will draw you a card before Quick Shot checks its condition, and thus Quick Shot will not draw you a card since your hand was not empty anymore when it checked it.[1]

As a cheap and mana-efficient burst of damage, Quick Shot makes for a very strong aggressive card that is excellent at all stages of the game. While directly comparable to Darkbomb and Frostbolt, its unique draw mechanic gives it extra synergy with several of the Hunter's potential playstyles.

Put this in a deck along with cards such as Kill Command, Arcane Shot, Explosive Trap, etc - anything that is low in mana cost that can damage the enemy hero. After all sources of burst damage from the hand are depleted, this card replenishes the hand with an extra card for that final push. It is also the highest damage card hunter has for 2 mana, meaning it can be used to answer cards such as Northshire Cleric, Mana Wyrm, etc., a turn earlier than Eaglehorn Bow can.