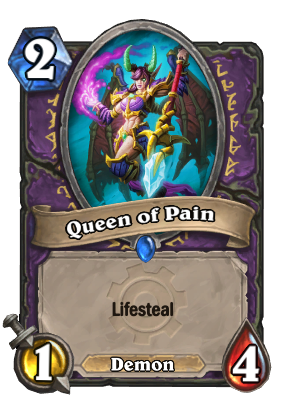 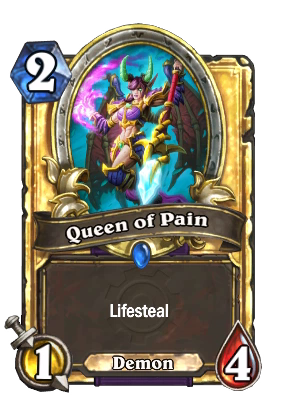 Her sister is the Queen of Pane who sells windows and shower doors.

Queen of Pain is a rare warlock minion card, from the Goblins vs Gnomes set.

Queen of Pain can be obtained through Goblins vs Gnomes card packs, or through crafting.

While this card has very low Attack, as a Demon it can be buffed with cards like Demonheart or Crystalweaver to increase its attack, giving Warlocks a marginal source of healing. As a 1-Attack minion, it combos well with Hobgoblin.

Nathrezim (called dread lords or dreadlords in the Common tongue) are intelligent and cunning demons who usually act as intelligence agents, interrogators and emissaries for the fiery lords of the Burning Legion, notably Kil'jaeden, as well as tacticians and lieutenants upon the field of battle in times of war. While they are powerful foes on the battlefield, they prefer to turn nations against each other through manipulation and guile. The nathrezim are merciless villains who feed upon the energies of mortal creatures. They utilize terror and subterfuge - often turning brother against brother as whole worlds fall before their dark influence. They are known to be extremely manipulative and masters of trickery; they sometimes refer to themselves as thal'kituun in their language, meaning "the unseen guests".

Their homeworld, Nathreza, found a similar fate to Draenor, as Illidan Stormrage obliterated a great part of it. The demon hunter believed that he caused a cataclysmic explosion by overloading the portal he had opened to Nathreza.

During the Third War, some dreadlords served as the Lich King's jailors, at the behest of Kil'jaeden, and commanded the Plague of Undeath and the Scourge that swept through Lordaeron.

The card now named Queen of Pain was originally called Mistress of Pain and depicted a succubus, or female sayaad (though the Mistresses of Pain in World of Warcraft are actually shivarra minions of Lord Jaraxxus). In patch 14.6.0.31761, the card was renamed to Queen of Pain, with new card art, voicelines, and flavor text to reflect its new identity.