For other representations of Azshara, see Queen Azshara (disambiguation).

This article is using {{Card template}}.
See Help:Style guide/Card for how to edit this kind of article.
Edit this article
Queen Azshara
72923 • TSC_641
Regular 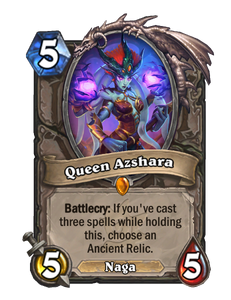 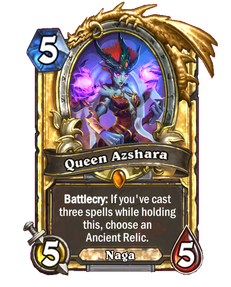 Hobbies include: Ordering subjects around, making deals with old gods, and taking long walks under the beach. 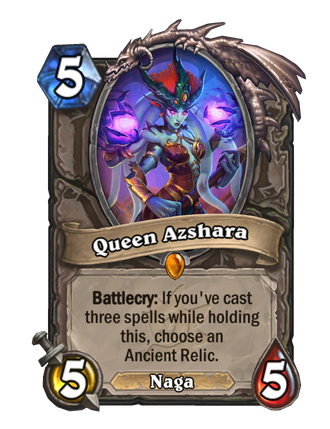 Queen Azshara is a legendary neutral minion card, from the Voyage to the Sunken City set. 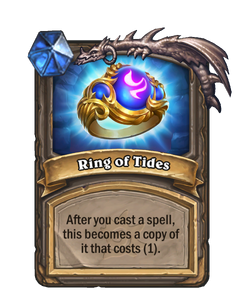 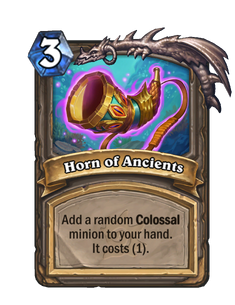 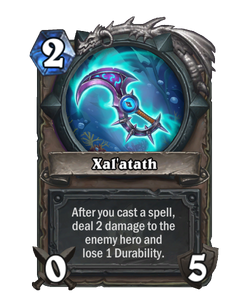 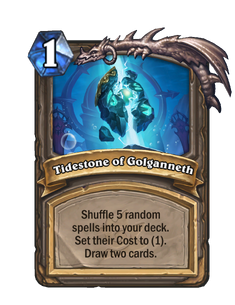 Azshara is the queen of the naga, ruling from the underwater city of Nazjatar. Once the beloved ruler of the Kaldorei Empire over ten thousand years ago, she was entrancingly beautiful and beloved by her people. When her Highborne made contact with the Dark Titan

Sargeras and his Burning Legion, she accepted his offer to cleanse her world of the impure, of the inferior races. The Highborne and the demons worked together to summon the full might of the Legion and their master on Azeroth through the Well of Eternity, but the Kaldorei Resistance thwarted their efforts.

One day, the queen was approached by her most trusted advisor, Counselor

Xavius, with an idea of using the power of the Well of Eternity to cleanse the world, and make it perfect in her eyes. Their meddling with immense magic, however, drew the eye of an interested observer: Sargeras. Seeking to unleash his Burning Legion upon Azeroth, the Dark Titan entranced Xavius, pulling him under his power, following quickly with most of the Highborne and eventually Azshara herself. Xavius helped the queen communicate with Sargeras, whom she told of her desire to cleanse the world of the lesser races. Sargeras tricked the queen into making a portal from which was launched the first invasion of Azeroth by the Burning Legion, an event which is now known as the War of the Ancients.

Eventually, a resistance was formed, but Azshara paid no attention to their efforts. Sargeras dispatched three of his most dangerous minions to do his bidding:

Hakkar the Houndmaster, Mannoroth the Destructor and finally Archimonde the Defiler. All three commanded and watched over the Legion and would have prevailed had it not been for the efforts of three night elves:

Illidan Stormrage the sorcerer (twin to Malfurion), and

Tyrande Whisperwind the priestess (beloved of both brothers), and three heroes from far into the future: A dragonmage in a high elf form known in humanoid shape as Krasus and as a dragon Korialstrasz, a skilled human wizard named