This article is using {{Card template}}.
See Help:Style guide/Card for how to edit this kind of article.
Edit this article
Quartermaster
2028 • GVG_060
Regular 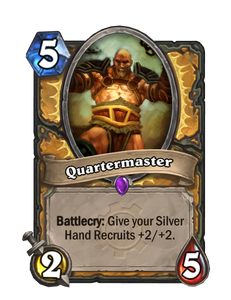 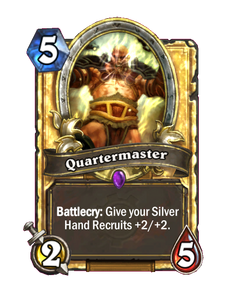 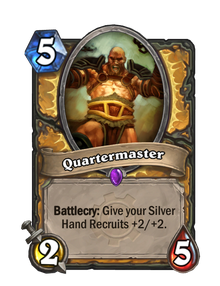 Quartermaster is an epic paladin minion card, from the Goblins vs Gnomes set. His Battlecry affects only friendly Silver Hand Recruits.

This minion has sub-par statistics by itself, but the sheer potential of his Battlecry more than compensates for this, turning Silver Hand Recruits into more damaging and resilient threats. Even if it only affects a single Silver Hand Recruit, the Quartermaster offers 4/7 worth in stats, split over two minion bodies; a strong board presence that is difficult to remove with a single card. Recruits can be further improved with cards such as Lightfused Stegodon or Level Up!.

In the mid-game and beyond, frequent use of Reinforce will force opponents to remove Silver Hand Recruits, for the threat of a Quartermaster being played. Quartermaster has excellent synergy with Muster for Battle. If saved to play on the same turn, the 8 mana/2 card combo creates 11/14 in stats, a sizeable and intimidating board presence out of the blue.