This article is using {{Card template}}.
See Help:Style guide/Card for how to edit this kind of article.
Edit this article
Puzzle Box of Yogg-Saron
53442 • ULD_216
Regular 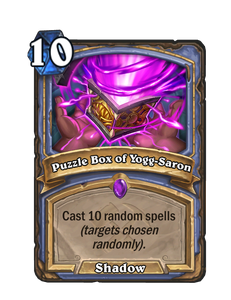 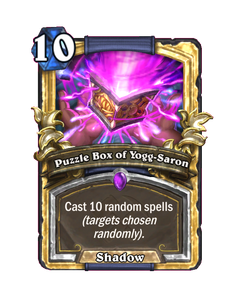 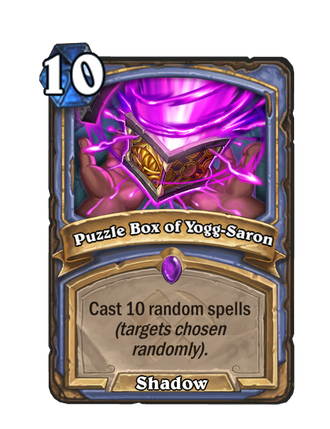 Puzzle Box of Yogg-Saron is an epic mage spell card, from the Saviors of Uldum set.

Puzzle Box of Yogg-Saron is an excellent last-ditch play when you've run out of options. Similar to

Yogg-Saron, Hope's End, this card can potentially win the game on the spot, or at the very least put you in a favorable position. However, it's very unreliable. As such, it's generally a bad idea to play it while ahead, since it could easily swing the game in your opponent's favor.

Compared to Yogg-Saron, Puzzle Box provides a far more consistent outcome, but is somewhat weaker for it. It lacks the 7/5 minion upfront, making medium-rolls a lot rarer as they will leave you with no board advantage. It also gives less friendly targets for buffs. The spell also can't be boosted above ten, where as Yogg can potentially cast far more. However, Puzzle Box can't change ownership. It also can be played in a deck with few spells and still activate.

Be careful playing this card near or in Fatigue, since many spells have card draw effects that can quickly destroy your hero. It's also better to play it with a small hand to avoid overdraw.

Since the spell is quite expensive, it's often a good idea to cheat it out using cards like

Naga Sand Witch. It can also be used with

The Puzzle Box of Yogg-Saron, named after the Old God Yogg-Saron, is a strange artifact that can be uncovered through the nerubian branch of the Archaeology profession in World of Warcraft. Once it has been assembled, the player can interact with the box in a "vain attempt" to open it, causing the artifact to whisper one of several ominous lines to the player. The Archaeology interface describes the object in the following way: