This article is using {{Card template}}.
See Help:Style guide/Card for how to edit this kind of article.
Edit this article
Purify
39468 • KAR_013
Regular 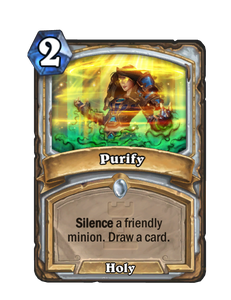 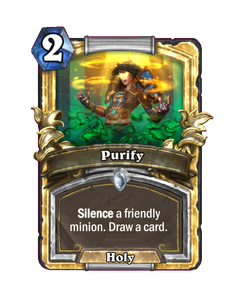 Even better than a hot shower with vigorous scrubbing! 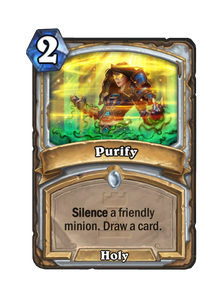 Purify is a Common Priest spell card from the One Night in Karazhan set.

This card's Silence effect makes target selection critical. Any plain, unenchanted minion will provide no drawback, as will Battlecry minions and those with unimportant abilities. However, this spell is best when used on a target with a negative enchantment or undesirable card text. As well as hostile effects such as Corruption, Freeze effects and Power Word: Glory, Purify works very well with the 1/1 copies created by Herald Volazj or Barnes, especially if the copy is a high stat minion like a Giant or legendary Dragon. Purify is best included in a deck with such cards.

Purify can also work with Ancient Watcher, Eerie Statue, and Humongous Razorleaf, but mostly provides only a tempo advantage, since the overall mana cost of these combos is the same as alternatives like Chillwind Yeti and Boulderfist Ogre. For example, playing a turn 2 Ancient Watcher followed by a turn 3 Purify will give the player a usable 4/5 on turn 3, where a Chillwind Yeti would not be active until turn 5. However, such combos require having both cards in hand, making them unreliable.

Purify's card draw effect compensates for the spell's relatively low value, putting it a step above Silence, although it is limited to friendly targets. This can also help to shrink the player's deck, producing higher turnover and increasing the odds of finding key cards.

Purify has synergy with Ragnaros the Firelord when it is important to deal 8 damage to a specific target, removing his end of turn effect but in turn allowing the player to command him to attack.

Despite its potential for novel applications the spell is considered by most serious players to be a very poor card in most decks, although it has been described as "awesome" and extremely fun in the right deck (see Silence Priest).[2]

The release of Journey to Un'Goro has provided more minions that benefit from being Silenced, such as Humongous Razorleaf and Frozen Crusher.

Purify is a Holy and Discipline ability from World of Warcraft that removes harmful magic and disease effects on a friendly target. The spell's Hearthstone incarnation could be used to remove harmful enchantments, although it is also capable of removing very useful abilities.