This article is using {{Card template}}.
See Help:Style guide/Card for how to edit this kind of article.
Edit this article
Psychopomp
53935 • ULD_268
Regular 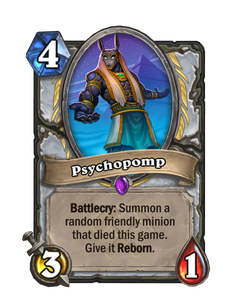 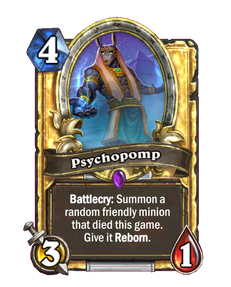 "Come with me if you want to re-live." 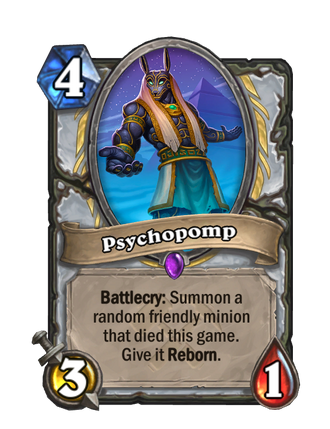 Psychopomp is an epic priest minion card, from the Saviors of Uldum set.

Psychopomp can create situations where it generates a ton of tempo. On top of reviving a minion with full health, the addition of Reborn makes it more stubborn to remove. It can be used to revive a low-cost minion with high base stats like

Injured Tol'vir, or saved for later to revive something more powerful like

Northshire Cleric is a decent minion to revive, as long as it's something that should not be left alive for too long. Psychopomp itself has low base stats and it will make the second copy more likely to miss, but the benefit of the first one often outweighs it. Like with other similar cards, leave out playing weaker minions so that it's more likely to revive something good.

The anubisaths are titan-forged giants made of obsidian. Originally assigned by Highkeeper Ra to safeguard the fortresses of Uldum and Ahn'Qiraj, the ones guarding the latter were eventually enslaved by the qiraji.