This article is using {{Card template}}.
See Help:Style guide/Card for how to edit this kind of article.
Edit this article
Psychic Scream
43112 • LOOT_008
Regular 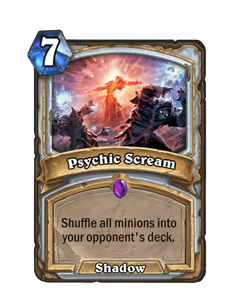 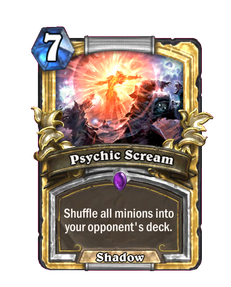 Everybody! Hit the deck! 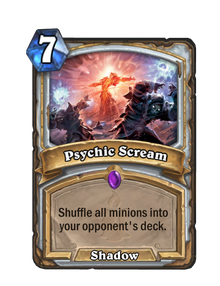 Psychic Scream is an epic priest spell card, from the Kobolds and Catacombs set.

This card is an extremely powerful board clear, and while it supposedly has a downside, it's more often than not actually an upside.

The possible negatives of using Psychic Scream is that the minions can reuse their Battlecry, your opponent can have access to your own minions, and it makes the opponent last longer before going into Fatigue. On the positive side, it doesn't trigger any Deathrattle effects and is very effective against token minions. Most token minions are less mana-efficient when played from hand and don't have any card effects. With multiple token minions shuffled in, it increases the likelihood of your opponent drawing bad cards, which can delay turns — especially with combo decks. It's also effective on any effects that dump a bunch of large minions on the board like N'Zoth and kill their tempo.

Note: Since it also shuffles YOUR minions into the enemy's deck, it is best played when you have no minions, or at the very least, a few low-value minions or synergy-dependent cards, on your side of the board. Otherwise, you may give your best minions to your enemy's deck, and they could potentially turn against you.

It can be used to disrupt effects that are dependent on deck composition, such as Rhok'delar, Reno Jackson, and Murkspark Eel.

This card can find its place in any Priest deck that needs a board clear, except possibly decks that are focused on fatiguing out the opponent.

Psychic Scream is a level 12 ability for Discipline and Shadow priests that causes the priest to unleash a scream which sends nearby enemies fleeing in fear for up to 8 seconds.