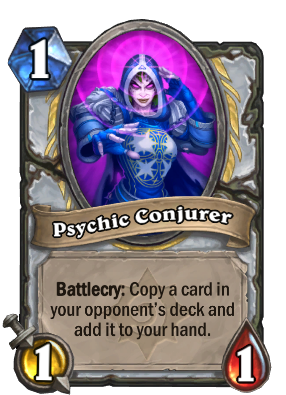 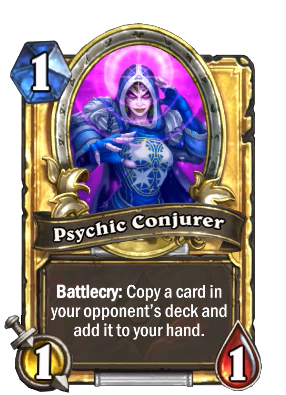 Battlecry: Copy a card in your opponent's deck and add it to your hand.
Flavor text

Psychic Conjurer is a priest minion card, inducted into the Legacy set, formerly from the Basic set. 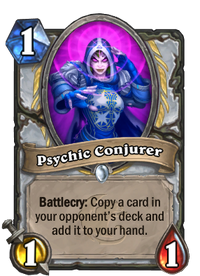 Two copies of regular and golden Psychic Conjurer are automatically given after the player completes the Ranked's New player experience system, unlocking Wild and Classic format.

Psychic Conjurer (Core) is uncraftable and cannot be crafted or disenchanted.

Psychic Conjurer is a decent turn 1 play, since it puts a body into play and replaces itself in your hand. It's effectively a Mind Vision on a 1/1 body. Unlike Mind Vision, the card comes from the deck rather than the hand, making the scouting aspect less useful. However, you also have a higher chance of pulling a high cost card, and your opponent will be less likely to know what you pulled.

This card's art appears to depict a Forsaken wearing an August Celestials Tabard.

The August Celestials are four Wild Gods who defend the temples of Pandaria from the evils of the sha and mogu. This faction includes the four celestials and their respective servants.