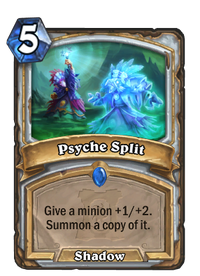 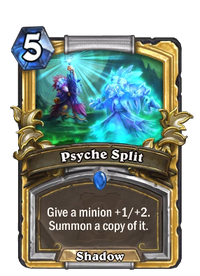 This is how the arakkoa make friends.

Psyche Split is a rare priest spell card, from the Ashes of Outland set.

Psyche Split is essentially Divine Strength and Molten Reflection combined together into one. Note that the buff is applied first and then a copy is made, granting +2/+4 stats in total.

Psyche Split is not a great card to buff a minion on its own since it is very expensive instead its used on copying a minion with a great effect like Sethekk Veilweaver, a Deathrattle, or just a high stat minion. Note that since is produces a copy, using buffs like Grave Rune and Apotheosis will also be transferred to the copied minion.

Psyche Split can also be cast on opposing minions. While this will give them a minor 1/2 buff, you'll summon your own buffed copy. You can use this to duplicate powerful effects like Murgur Murgurgle, Skeletal Dragon, or Archmage Vargoth. It can be especially powerful if you are able to destroy minion after casting Psyche Split on it. This can also be used to push a 4-attack minion into Shadow Word: Death range, killing the minion and summoning your own buffed copy.