This article is using {{Card template}}.
See Help:Style guide/Card for how to edit this kind of article.
Edit this article
Proving Grounds
65610 • DED_508
Regular 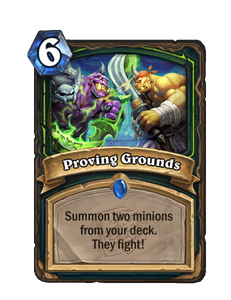 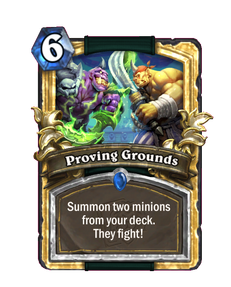 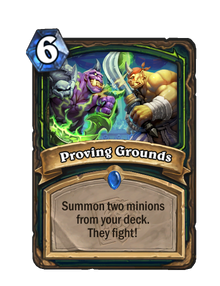 Proving Grounds is a rare demon hunter spell card, from the Deadmines mini-set.

Proving Grounds does cheat two minions from the player's deck but it can be very difficult to use as both will attack each other resulting in either both minions being cheated out at low health or both minions dying immediately resulting a waste of 6 mana.

Due to how difficult it is to use Proving Grounds, it is best used on Deathrattle Minions such as Fel Rattler, Fel Summoner, Razorfen Beastmaster to immediately trigger their effects or using a Dormant minion like Imprisoned Antaen to prevent the other minion attacking it. It can also be used with Divine Shield minions to guarantee survival after a hit.

Another scenario can be where the player could summon a big minion and a minion with a Deathrattle to get the best outcome to preserve a big minion as well as a Deathrattle trigger. Some examples are Scrapyard Colossus, Coilfang Warlord, Burning Blade Acolyte, Plagued Protodrake, and etc.

If this card summons Feugen and Stalagg, their resulting deaths will summon TWO copies of Thaddius.