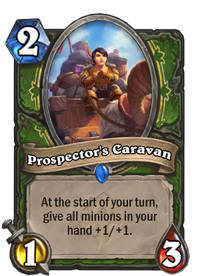 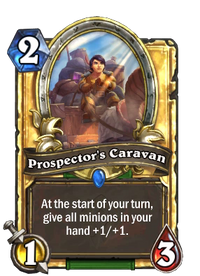 At the start of your turn, give all minions in your hand +1/+1.
Flavor text

Prospectors came from all around in the Golden Legendary Rush of '49.

Prospector's Caravan is a rare hunter minion card, from the Forged in the Barrens set.

Prospector's Caravan's effect is good if you can activate it even once (the similarly-costed Grimestreet Outfitter is still a key card in Wild Handbuff Paladin), but the fact that it triggers at the beginning of your turn makes it unreliable at best. Control opponents will likely try to eliminate it immediately (denying you the effect entirely if they do so), while aggro and midrange decks can already have enough board presence to remove it with little issue.

Nevertheless, this card is still available if you want to make a dedicated Handbuff Hunter deck. The fact that Prospector's Caravan's effect boosts every minion in your hand is actually unique among Hunter's handbuff options; most of them only hit one minion at a time (Scavenger's Ingenuity, Hidden Cache, Shaky ZIpgunner, etc), and the rest will only affect a certain type of minion (Don't Feed the Animals, Forlorn Stalker). Regardless, relying on this card alone is ill-advised; use it as an additional tool rather than your primary source of stat bonuses.

There are 3 achievements related to Prospector's Caravan.