This article is using {{Card template}}.
See Help:Style guide/Card for how to edit this kind of article.
Edit this article
Prophet Velen
9 • EX1_350
Regular 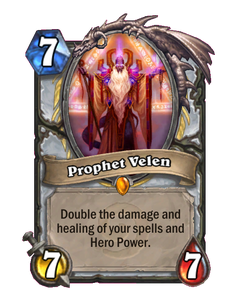 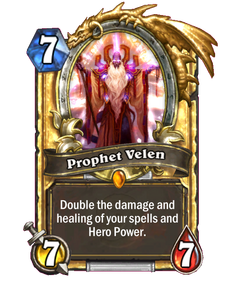 He's been exiled from his home, and all his brothers turned evil, but otherwise he doesn't have a lot to complain about. 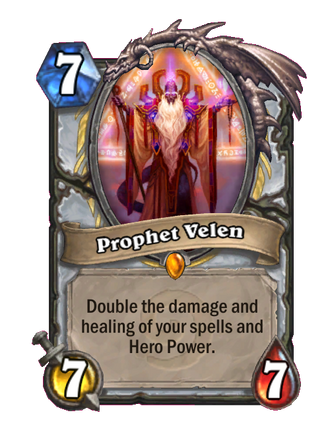 Prophet Velen is a legendary priest minion card, inducted into the Legacy set, formerly from the Classic and Hall of Fame sets. 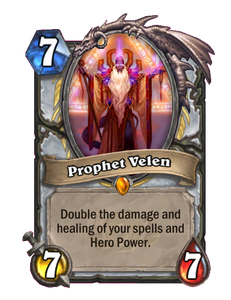 Example: with a Prophet Velen in play,

Lesser Heal will read "Restore *4* Health.".
Example: if you have Prophet Velen,

Flash Heal in your hand will display the text "Restore *10* Health." but it will instead deal 12 damage to its target when cast, since Auchenai Soulpriest turned it into a damaging effect which then benefits from Azure Drake's Spell Damage bonus.

Prophet Velen can dramatically increase the priest's effectiveness in the late-game. His passive affects the priest's spells as well as their Hero Power. Lifesteal spells (i.e.

Spirit Lash) doubles the healing on top of the double damage, resulting in a huge health swing.

DIE, INSECT!, as well as the Hero Powers granted by

Charged Hammer. Note that the doubled damage on Life Tap is usually a bad thing.

This card should be considered to have a soft taunt. Your enemy will go to great lengths to kill Velen due to the power he brings in the late game. Be prepared to protect him with taunt minions, healing or divine shields.

His high mana cost makes it difficult to fully utilize his effect. Cards that can potentially summon him for cheaper cost like

Velen has been the leader of the draenei people since their flight from Argus 13,000 years before the first orcish invasion of Azeroth. Known by his people as the Prophet, he has been granted the gift of the Sight, and — aided by the Light — rejected offers of dark power from Sargeras and has guided his people as they fled from, and later fought against, the Burning Legion and their former eredar brethren. He is first among the draenei and is the arch-nemesis (formerly best friend) of Kil'jaeden.

Following the draenei's flight to Azeroth, they made a new home on the Azuremyst Isles and, sensing great courage in the Alliance, Velen and his followers pledged themselves to this noble faction. The strengthened Alliance then helped the draenei reclaim their former holdings from the Legion. Most recently, Velen used the heart of the naaru M'uru to sanctify the blood elves' tainted Sunwell, transforming the sacred fount into a source of holy and arcane energies.

Although the Legion's forces in Outland have been greatly diminished and the demonic invasion of Azeroth has been driven back, Velen remains fearful of an upcoming war between light and shadow.

Velen is also the mentor of