This article is using {{Card template}}.
See Help:Style guide/Card for how to edit this kind of article.
Edit this article
Professor Putricide
42563 • ICC_204
Regular 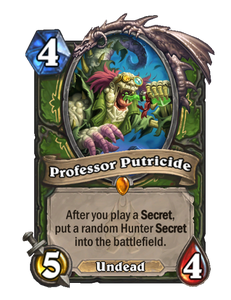 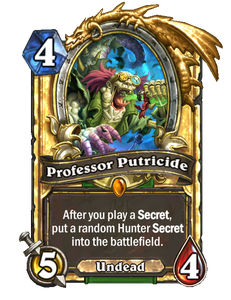 Dimensions: Full • 330 x 410px
Elite
After you play a Secret, put a random Hunter Secret into the battlefield.
Flavor text

Among his more notable inventions: A tentacle-groomer, a plague that would wipe out all life on Azeroth, and a fidget spinner. 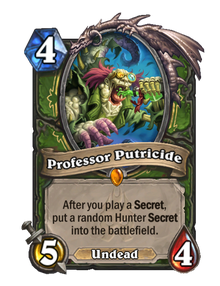 Professor Putricide is a legendary hunter minion card, from the Knights of the Frozen Throne set.

The stats of Professor Putricide are good on its own, but its text is what makes it special; for every secret you play, you technically play two secrets, which will make your opponent have to play around the secrets.

"Good news, everyone! I think I've perfected a plague that will destroy all life on Azeroth!"

Professor Putricide is the Scourge genius behind the development of all forms of blight, plague, ooze, scourge, and death delivery. He is the final boss in the Plagueworks section of Icecrown Citadel, the first Icecrown wing to be unlocked. In order to reach his laboratory, players must first defeat Festergut and Rotface.