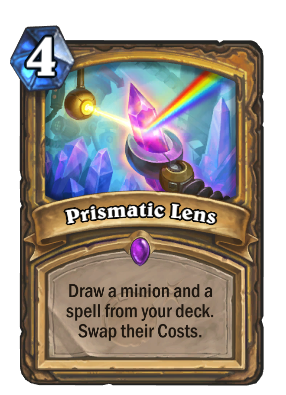 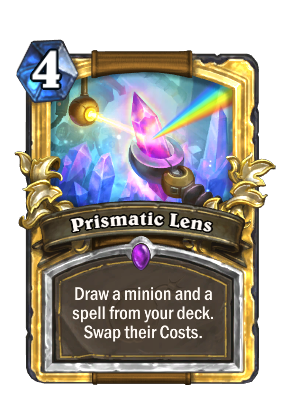 Draw a minion and a spell from your deck. Swap their Costs.
Flavor text

Mined exclusively from the dark side of the moon.

Prismatic Lens is an epic paladin spell card, from The Boomsday Project set.

Prismatic Lens can be obtained through The Boomsday Project card packs, or through crafting.

This card's effect is tricky to optimize, but pays off well if done so. Although one card will be an overpriced, most-likely dead card, having access to the higher-costing card at a much lower price compensates for it greatly. Ideally, your deck should have either mainly low-cost minions and high-cost spells, or vise versa. You should also have a small number of high-costing cards of one kind in proportion to the low-costing ones of the other to increase the chances of discounting the cost of the card you need. Consider the following options for either:

The flavor text is a reference to The Dark Side of the Moon by Pink Floyd, which has a similar album art.