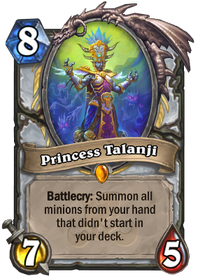 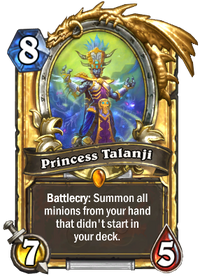 Battlecry: Summon all minions from your hand that didn't start in your deck.
Flavor text

Everyone wants to be a princess, but nobody ever considers the size of the hat.

For the boss of the same name, see Princess Talanji (boss).

Princess Talanji is a legendary priest minion card, from the Rastakhan's Rumble set.

Princess Talanji can be obtained through Rastakhan's Rumble card packs, or through crafting.

Princess Talanji is a massive late game card that allows a Priest fill the board in a single turn. The biggest advantage to playing this card is that it has the potential of circumventing mana pool limitations to present an extremely strong board for 8 mana. This is excellent for End-Turn effect minions or Deathrattles, but will prevent battlecry minions from activating their abilities. Another minor caveat to playing Talanji is that these cards must not have started within the Priest's deck. However, Priests have several ways to generate these resources:

Battlecries or minions that generate other minions such as those from Griftah and Ysera apply. Spells and minions that can Copy minions will help generate minions for Talanji's pool. Cards such as Seance, Cloning Device and Thoughtsteal in particular are good for this. Lastly, cards reshuffled into the deck from Spirit of the Dead's effect count for Talanji's minion pool.

Talanji is best played after your opponent has expended most if not all of their board-clearing spells or battlecries such as Brawl, or Deathwing, and is best played in conjunction with large and powerful minions such as Ysera or Big Bad Archmage. This will ensure a very sticky board with minions too big for most board clears, and too numerous for removal.

A Spirit of the Dead and a Bwonsamdi, the Dead will further enhance a deck that Talanji is in. If a Spirit of the Dead is on the board it ensures that the other cards and Talanji herself can be reshuffled into the deck, and then subsequently re-pulled by Bwonsamdi and replayed for one mana.

In Wild, this card synergizes relatively well with Awaken the Makers as playing deathrattles such as Crystalline Oracle, Shallow Gravedigger, Weaponized Pinata, and Bone Drake which not only generate value, but also help in fulfilling the quest's conditions. Do take note however, that Amara, Warden of Hope will be pulled if Talanji is played. A Seance can help alleviate this problem. Stonehill Defender and Archbishop Benedictus are also great for maximizing Talanji's Battlecry.

She has strong synergy with Galakrond, the Unspeakable, summoning every minion you've generated via the Invoke effect, making pulling off a big Battlecry with her easier to pull off.

Talanji is particularly powerful if she is gotten from Arch-Villain Rafaam or the Golden Monkey, filling your board with legendaries.

Princess Talanji is the Princess of the Zandalari Empire and daughter of God King Rastakhan. She is a priestess of the loa Rezan. She later forms Talanji's Expedition, a united group of Zandalari and Darkspear Trolls who combat the blood trolls of Nazmir.

Unlike her father, Princess Talanji does not think the old ways are always best and believes that the Zandalari must adapt if they are to survive in a changing world. While her father's advisers were wary of making an alliance with the Horde, Talanji was a staunch supporter of the Zandalari and Horde uniting to face their common enemies.

In Hearthstone lore, Talanji serves as the champion of Bwonsamdi's Zombies, the priest team in Rastakhan's Rumble.

As princess of the Zandalari Empire, Rastakhan’s own daughter calls the loa of the dead, Bwonsamdi, her companion. Talanji will aid Priests in turning their foes' own might against them if forced to fight.[1]

Everybody knew that Princess Talanji was a reluctant Rumbler, and everyone also knew that it didn’t matter: with her as Champion of the Zombies they were the team to beat. Rumor had it that King Rastakhan himself had made some kind of bargain with Bwonsamdi, and ever since his family (including Princess Talanji) was required to serve the Loa of the Dead. Rikkar would have joined the Zombies at the stop of a heart, deal or no deal—Bwonsamdi was one of the most powerful Loa around.[2]